Midlands theatre company “Don’t Go into the Cellar!” will be performing an original one-off show to help save Sir Arthur Conan Doyle’s former home this Christmas. 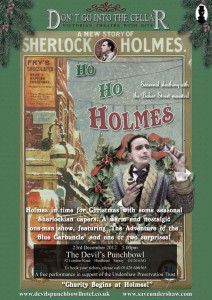 Ho, Ho, Holmes is a one-man show featuring Sherlock Holmes at Christmastime. It will be performed on December 23rd at The Devil’s Punchbowl Hotel in Hindhead, Surrey – just a short distance from Sir Arthur’s former residence, Undershaw.

Undershaw has made the national headlines in recent months, as property developers tried to convert the historical property into flats. However, thousands of supporters from around the world, including Stephen Fry and Mark Gatiss, have been rallying round to save the house in which Conan Doyle brought Sherlock Holmes back from the dead in “The Hound of the Baskervilles” and “The Adventure of the Empty House”. The Save Undershaw Trust has been set up to protect the author’s old home.

Although the performance itself is free to watch, donations to help the Undershaw Preservation Trust’s operating expenses will be gratefully accepted on the evening of the event. Auctions are being planned to benefit the campaign as well.

“Don’t Go into the Cellar!” has performed several Sherlock Holmes plays since its inception in 2010, and the company is thrilled to be able to lend its support to such a worthwhile cause.

Further details of the charity event can be found on the Trust’s website, www.saveundershaw.com or by contacting The Devil’s Punchbowl Hotel on 01428 606565.