Birmingham’s Friends of the Central Library has submitted a formal objection to the Argent planning application for Paradise Circus.

The scheme submitted by the applicant is predicated on the demolition of every single building on the site regardless of its age, condition, or architectural merit. 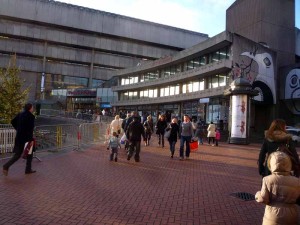 Pre-eminent amongst these buildings is the Central Library, the most significant public building designed by architect John Madin who was born in Moseley, lived in Edgbaston, trained at the Birmingham School of Architecture and ran a large practice in Birmingham up to the 1980s. John Madin died in 2012 at the age of 87.

Friends of the Central Library and many others argue that if and when this building is no longer needed as a library it can be given a new use and be successfully integrated into any commercial redevelopment proposal.

To demonstrate the feasibility of this approach, the Friends commissioned architect and Urban Designer Joe Holyoak and Architect Rob Turner to draw up an Alternative Master Plan. This was presented, along with some outstanding student theses at a public meeting on 17 May 2012 at the Birmingham and Midland Institute.

Since it was opened in 1974 the Central Library has been the subject of both accolades and criticism. It is without doubt a building that stimulates strong personal opinions and heated public debate. But personal opinion, however sincerely held or expressed and however important the person expressing it, cannot on its own be a sound basis for deciding the future of an important example of Twentieth Century architecture. The philosopher Alain de Botton, in The Architecture of Happiness (2006) writes, as a lay person in this context: ‘We may decide that we hate nineteenth century gothic, for instance, because it characterised a house in which we were unhappy at university, or revile Neoclassicism because it had the misfortune to be favoured by the Nazis.’

The expert organisations and individuals who have expressed a considered professional view based on wide experience and knowledge of architectural history are as follows:

Amongst the many publications in which the authors acknowledge the merit of  the Central Library are:

Popular support for an alternative to demolition is demonstrated by the following:

Friends of the Central Library itself was formed at a public meeting in February 2007 and maintains contact with 100 supporters from all walks of life. Spokespersons for the group have featured frequently in the press and broadcasting media to challenge the Council’s decision to demolish the Library, and to promote creative uses for the building

OBJECTIONS TO THE APPLICATION

In pursuing a predetermined desire for a site free of all existing buildings, the applicant has, understandably from his point of view, excluded evidence about the Central Library that does not support the case for demolition.

The applicant only implies rather than demonstrates through the supporting documents that what is proposed by demolition of the Library and subsequent new construction constitutes a significant improvement. We will outline our objections to the application under the following headings:

The supporting document on Sustainability by ARUP excludes any consideration of existing buildings such as the Central Library. There is no consideration given to the relative merits of demolition and retention from a sustainability point of view. 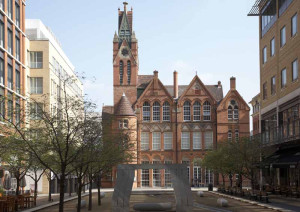 Retaining sound existing buildings and structures within a scheme of redevelopment is not unusual, nor is it incompatible with the objectives set out by the applicant in this case. Argent themselves successfully integrated the redundant Oozells Street School, converted into the Ikon Gallery, into their Brindleyplace development, in a way which adds significantly to the quality of the whole.

The studies received by FCL confirm the opinion of the architect and structural engineer responsible for the design of the Library that it can easily be adapted to a wide range of alternative uses including high quality commercial offices, a hotel or even a department store.

Threatened climate change is leading progressive governments and local authorities to practise sustainability and one of the principal means is by retaining and adapting sound buildings that can stand the test of time.  The structure of the Central Library has been designed to carry book loadings, which are twice that of normal office loadings,  over large spans using deep reinforced concrete coffer construction.   The structure was designed to last and the work  was carefully supervised by a resident engineer.  The resulting structure is extremely robust and shows no sign of deterioration, apart from repairable roof and wall claddings, which were made offsite. The energy used in demolishing such a large building coupled with the further energy required for a replacement building would be a significant departure from current good practice as exercised by responsible authorities.  As a member of the Climate Change Adaptation Partnership and a supporter city of former President Clinton’s Climate Initiative Birmingham City Council should emulate the policies of the C40 group of world cities by reducing its carbon footprint , wherever possible.   The Central Library is an excellent opportunity.’ 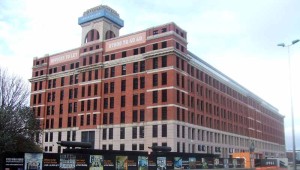 Fort Dunlop after conversion and renovation

It has often been claimed by proponents of demolition that the Library suffers fatal structural defects. However the report by engineers Scott Wilson commissioned by the Council in 2007 found no evidence on which such a claim could be based.

The designers of the Central Library were very aware of the challenge presented in placing a large modern building amongst a set of stone-built historic ones. Despite its bulk, it is widely acknowledged that the architects placed it in such a way that it does not dominate the small Chamberlain Square. (In comparison, the new library in Centenary Square is twice the height of Baskerville House and makes no aesthetic concessions to its historic neighbours.) 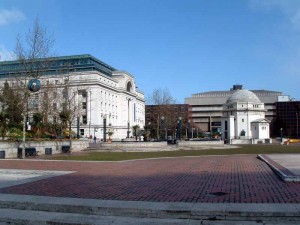 Baskerville House and Hall of Memory

Madin’s first preference for cladding the Central Library was Portland Stone or Travertine Marble either of which would have been similar in tone, colour and texture to the stone of Baskerville House, the Hall of Memory, the Town Hall and the Council House. Even the cheaper pre-cast concrete cladding was carefully specified with white aggregate surface to imitate natural stone. The fact that some of these panels later proved defective does not invalidate the architect’s intention, especially as they are relatively easy to clean, repair or replace thereby restoring the building’s intended appearance. The applicant makes no mention of this possibility even in the supporting Heritage documents. Only sketchy views of the proposed facades are offered which do not show how the new buildings that overtop their historic neighbours and which are clad in manufactured materials such as glass, steel or aluminium, will be more respectful of the surrounding stone buildings than the Central Library restored to its original condition.

The English Heritage report of 2003 records, ‘The main block [of the Central Library] was designed as a modern monumental building to vie with the older monumental civic buildings around it’. It goes on to say that ‘The new library was conceived by the Birmingham Corporation in the same spirit of civic pride, and the consequence was a building on a similarly grand scale with the same monumental design quality – though one in style commensurate with the “boom” years of the 1960s’.

The CGIs published in the Birmingham Post (13 September 2012) showing existing and proposed together, illustrate all too clearly that Madin’s design is the more sympathetic to its surroundings.

The architects of the Central Library were fully aware of the need for pedestrians to move freely on a traffic-free concourse between the old (eastern) and new (western) sectors of the city centre. That is why the Library was built on columns on a platform over the ring road. This concept was popularised by professor Colin Buchanan in his book Traffic in Towns and was widely emulated in many towns and cities.  So effective is it that people standing at the front door of the Library are unaware that below them is a heavily trafficked urban road. 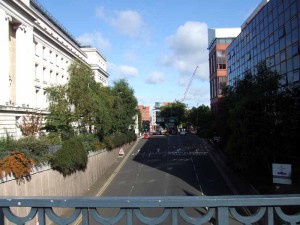 A view from the footbridge over Paradise Circus

Madin’s intention was to extend the idea with a high level bridge between the Library and Baskerville House but only the bridge to the Council House Extension was built. For some reason that bridge never became a public thoroughfare between the Art Gallery and the Library.

In retaining the pedestrian platform and its link to the east the applicant actually endorses the validity of the concept of complete segregation, but somewhat illogically, proposes to close off the road over which pedestrians are already carried in complete safety.

Pedestrian links to the west have always been relatively weak, perhaps because when the Library was opened neither Brindley Place nor the ICC existed and footfall was not what it is today. The lowering of the western arm of the roundabout and the insertion of a footbridge to Centenary Square was and is barely adequate as means of connecting east and west. The Library itself is not and has never been an obstruction to pedestrian movement as has been claimed by the applicant. 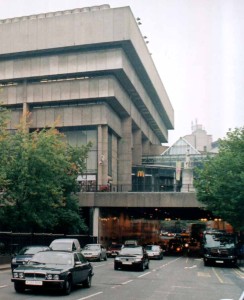 The applicant proposes to make no change to the bridge despite claiming that one of the main reasons for the development is to improve connectivity.

Before Paradise Forum was let to a developer who then sublet it for shops and fast food restaurants, it was possible to see from one side of the concourse to the other. The applicant owns the lease on Paradise Forum and is therefore partly responsible for the loss of those views.

Whilst it is possible to restore the views of the Town Hall and Council House by clearing away the clutter of Paradise Forum, the applicant’s argument that important vistas now blocked by the Central Library will be restored in the proposed development is unconvincing given the evidence of Verified View 02 and 04.

The long axial view of the Council House clock tower proposed in the Argent master plan never existed historically. The clock tower was not visible to people walking from Easy Row along the section of Edmund Street that was closed off by Madin’s library in 1974. The clock tower only came into view as they passed the 1879 library and emerged into Chamberlain Place (as it was then called).

Axial views are not the only way of arranging the view of a monument. Gordon Cullen, in his influential 1961 book Townscape, promoted a superior strategy which he called the screened vista, in which the view is deliberately withheld. Edmund Street, as described above, was an example of a screened vista. Another well-known example is the tower of Westminster Cathedral. 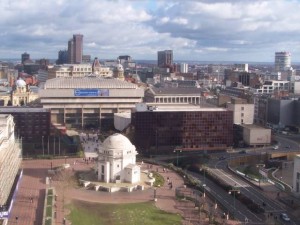 In conclusion, we urge members of the Planning Committee to defer consideration of this application and to require the applicant to present an alternative scheme that incorporates a retained Central Library building.

Only then will the Committee be in a position to judge whether a scheme of development that demands the demolition of the Central Library building is the best or only solution for the redevelopment of Paradise Circus.

A website called Keep The Ziggurat has more details.