Birmingham Repertory Theatre will celebrate its 100th birthday in February 2013 and as part of the plans to mark the landmark anniversary are asking for local people’s treasured memories of the theatre.  And, to collect and record these local memories, staff and volunteers from The REP will be camping out in Centenary Square during the Christmas season in a special REP100 Caravan. 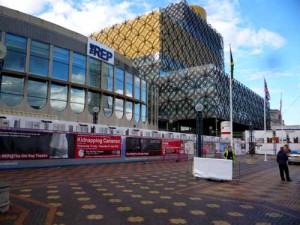 REP100, a project funded by the Heritage Lottery Fund, will bring to life 100 years of the Birmingham Repertory Theatre Company.  At the heart of the project is a new online archive, www.rep100.org, which will feature thousands of photos, letters, posters and programmes from past productions and also audio memories from audiences, actors, directors and playwrights.

Local memories are a vital part to the REP100 project, as Jenny Smith, Project Manager explains: “REP100 is very much about bringing our heritage to life and so, as part of our new digital archive, we are asking audiences, actors, directors and previous employees to tell us their memories which will create a new oral history archive.

We want to hear about people’s first memory of going to The REP – that visit may even have been their first visit to a theatre. Perhaps a relative worked at the theatre or they met a future partner there. They may remember the first ever production at the new REP on Broad Street in the 70s or have seen a star of the future at the Old REP on Station Street, our original home. Or they may just have had a lasting memory of seeing many of the exciting shows over the years from The Snowman to Of Mice And Men.  If they have a story we want to hear it.”

Stuart Rogers, Executive Director at The REP has already shared his memories: “My own relationship with The REP began in 1969 when I went to see Richard Chamberlain in Hamlet. From that moment I was hooked on theatre and returned shortly after to see Ben Jonson’s Volpone and a wide range of late-night experimental theatre that the company was producing at that time.

People have different reasons to love The REP – for some it’s the epic stage of the Main House for others the intimacy of The Door when you can be a breath away from the action. One thing for sure though is that for the many actors, staff and audiences who’ve been to The REP their visit will be saturated with memories. I hope people will share them with us.”

The REP 100 Caravan will be in Centenary Square, next to Baskerville House, as part of the Birmingham Christmas Market.  There will be a team of people ready to record memories and stories from 11am – 4.30pm every Friday and 10.30am – 3.30pm every Saturday until December 22.

The REP100 project has been made possible by a grant from the Heritage Lottery Fund and will form part of the theatre’s wider centenary celebrations.  In addition to the new online archive and oral histories, the celebrations will also include an exhibition, audio tours of the Old Rep theatre on Station Street and The REP’s current home on Broad Street, which is currently undergoing redevelopment as part of the Library of Birmingham, and a range of heritage activity days which will enable people to discover the story of the theatre through two world wars and into the swinging 60s and the end of theatre censorship.