Richard Lutz scurries over and round the Irish border. 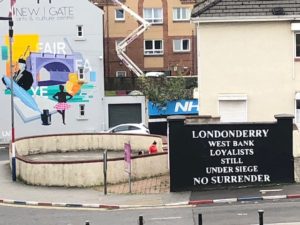 It’s time to fill up the car. I’m in Northern Ireland so I head across the border for Carlingford in the Republic – it’s 10p less per litre over there. In fact, prices are cheaper along the whole sinuous frontier. The border, in fact, is littered with Irish petrol stops crowing about the cheap fuel. One station even tells the visiting British how inexpensive it is in pounds and pence in case you can’t figure out the Euro currency. “That’s ten pence per litre you’ve just saved,” one sign tells me on the Donegal border.

Cheap fuel aside, there’s the mind-numbing squabble over post-Brexit trade. In less than four months, domestic custom barriers supposedly come into place. What does this mean? Well, if you make computer parts in, say, Belfast (which is in the UK) and you want to sell them in, let’s say, Birmingham (which is in the UK), you will have to go through an internal border station to clear the goods. One recent report quoted a County Armagh lorry owner saying that every truck must include the weight and cost of each item, the number of pallets and all ingredients and their origins for all supplies carried. It’s expected 50,000 more customs agents need to be recruited.

This whole ludicrous decision has arisen because there is no way to enforce trade checks between Northern Ireland, which is British, and the Republic, which will remain in the EU. There is simply no way this can be managed along a 310 mile open border between the two which is, in effect, a 310 mile open border come January 2021 between the UK and the EU. The only way to clear goods will be at the internal domestic ferry ports and airports linking Northern Ireland with mainland Britain.

In other words, post-Brexit, the border between Britain and the EU will be inside the UK. It’s as if a trade barrier was thrown up between Yorkshire and Lancashire or, in the US, between Kansas and Nebraska.

With the pandemic, these Brexit decisions have been left out in the cold. And the clock is ticking. And there’s been an ugly breakdown in Brexit negotiations between the UK and EU. And it’s all got to be pinned down by January 2021… just four months away.

With this in mind, zipping over the Irish border to fill up the tank shows how invisible the border really is. No controls could conceivably be reinstated on the spider’s web of roads between the two nations. For instance, one east/west thoroughfare crosses the frontier four times in less than six miles. And, ominously, any new cross border checkpoints, if ever agreed, could become targets for unhappy terrorists.

I ponder these points as I travel through towns only known to me by signifiers of a bloody past: Newry, Warren Point, Enniskillen, Omagh, Derry. They are dread names. They are blood names.

En route to the latter – called Derry or Londonderry according to sectarian leanings – little towns are bedecked with Unionist flags on lampposts. It’s mid-August and that means it’s still the marching season, when Protestant flute bands crowd the streets to celebrate dominance over Catholic fellow citizens. Kerbstones are painted in Union Jack colours to mark out loyalist sectarian neighbourhoods and murals in towns (as above) identify Protestant or Catholic enclaves. A security fence still divides (London)Derry to keep the peace: 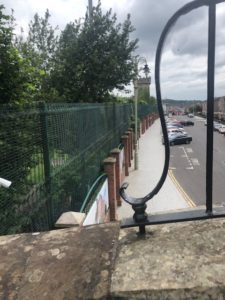 I make my way in and out of Northern Ireland, not only to fill up, but to take in the tourist sites: Malin Head in Donegal, the big beaches of Antrim, the London(Derry) walls, the massive New Grange Neolithic monuments in the Boyne Valley. 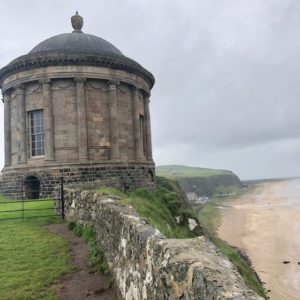 I’ve seen 1,000 year old towers that stand alone still against Viking raids, 250 foot sea cliffs at Fair Head and the mist rising from the quiet Mountains of Mourne as they face the equally quiet Cooley Hills.

It’s a gloriously varied and attractive part of the world. And an unsettled and an unsettling one too. As I leave on the Belfast ferry, news breaks of the arrest of six suspected members of an outlawed splinter group, the New IRA. It adds to the confusion. How is this entangled mess ever to be sorted out?

One thought on “Irish stew”