Fazeley Studios in Digbeth played host to a fringe session on Monday, October 8th, with an array of Conservative MPs and local creative Birmingham businesses coming together to discuss how to stimulate creative growth in the UK and the transformation that is underway in Digbeth.

The ‘Creative Hub’ was organised by the Creative Coalition Campaign as part of the Conservative Party Conference, which took place in Birmingham for the third year running this week. 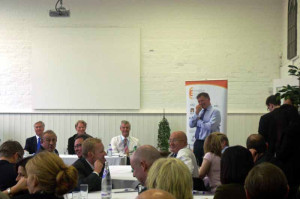 The first session saw a panel, which was chaired by Damian Collins MP, Business Minister Michael Fallon MP and Lucan Gray, owner and founder of Fazeley Studios and co-owner of the Custard Factory, discuss creative industries, start ups and growth.

Digbeth-based creative businesses, including Fazeley Studios tenants One Black Bear and John Charlton Photography, were invited to join in with the discussions to highlight their biggest success in business to date and the most current challenges they face.

The lively discussions were followed by a drinks reception, hosted by ITV in the Grand Gallery, with Creative Industries Minister Ed Vaisey MP taking to the stage as guest speaker. 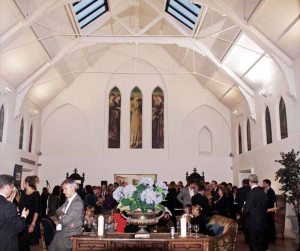 The Grand Gallery, a stunningly restored Unitarian chapel, provided a stunning backdrop for the drinks reception at Fazeley Studios

Lucan Gray, owner and founder of Fazeley Studios and co-owner of the Custard Factory, said: “It was quite striking to see three senior government ministers and three MPs holding a packed Conservative Party fringe event at Fazeley Studios earlier this week. They had come to talk about the transformation that is underway in Digbeth and the concentration of creative people and businesses that has grown up in the area over the last few years.

“I am pleased to report that along with fascinating debate they were all extremely impressed with the facilities, in particular the Grand Gallery, and the hard working and skilful team that we have on site. It was a test for the team to contend with the event being massively over attended and they passed with flying colours. Our VIP visitors went away happy, promising to return.”

Alexandra Mawer, Associate Director of Lexington Communications, who hosted the event, said it had been a “resounding success”. 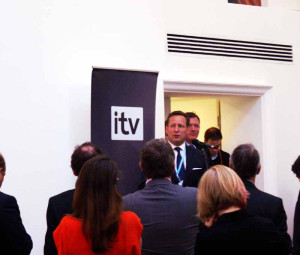