The REP is bringing theatre to a very different kind of venue when it stages its latest performance in a restaurant in the heart of the city’s Chinatown. 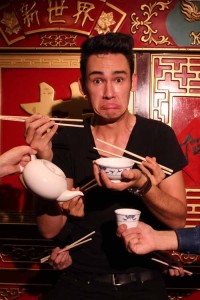 Dim Sum Nights, which runs at the Ming Moon restaurant from 13 to 15 November, is a unique new show that promises to tickle both minds and taste buds by combining bite-sized pieces of theatre with Chinese Dim Sum and tea.

This fun and engaging new show by the leading British East Asian theatre company, Yellow Earth, was created in 2011 in order to seek out up and coming new writing and directing talent.

From an unlikely friendship made at a wedding banquet to a family dinner party consumed with love, guilt and hunger, and from a troubled man entering a quiet restaurant to a butterfly yearning for love, this theatrical menu should provide something to suit every taste.  The writers behind Dim Sum Nights are: Thanh Le Dang, Clare Mason, Victoria Shepherd, Jeremy Tiang and Simon Wu.

Yellow Earth is a London based company established in 1995 that presents new theatre work by British East Asian artists in touring productions and readings for audiences from all backgrounds. They also run programmes to encourage and showcase emerging British East Asian actors, writers and directors.

Director Kumiko Mendl is one of the founder members of Yellow Earth, who has performed in many of their productions and steered the company’s education work before becoming the company’s Artistic Director last year.

Dim Sum Nights forms part of Birmingham Repertory Theatre’s offsite season. Since 2011 The REP has presented work in a variety of venues and spaces while its home on Centenary Square is closed for redevelopment as part of the new Library of Birmingham.  Recent productions have included Eat! – a play performed in four caravans, The Witches’ Promise – a large-scale community production performed in the ruins of Dudley castle and The Just Price of Flowers – a satirical play about the 2008 financial crisis performed in a disused factory.