Terry Wills on yet more contrasting fortunes at the Hawthorns. 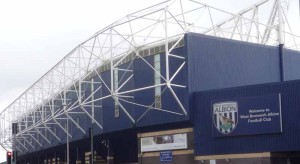 Two games of contrasts with different results that must have left many Baggies fans feeling far less optimistic as to the prospects for the season, even at this early stage. And who said the said the camera never lies? An old saying that with the advancement of cinematic photography has been blown out of the water.

The Reading game for instance. There I was sitting, watching and expressing the same sentiments as everyone within shouting distance. Especially in a boring, no, very boring first half. Passes going astray especially from Chris Brunt and with the majority of his team mates following suit I honestly felt that a single goal from either side would take the three points – and so it proved thanks to a Romelu Lukaku goal. What a prospect is this guy. Powerful, strong-running and a constant threat. But let’s enjoy him while we can. He’s certain to be recalled by Chelsea in January.

But as I watched the extended Sky match highlights I began to wonder whether it was me, plus every fan I’d chatted to, who had been over critical? There was a team stroking the ball around, defending resolutely, and creating chances. Barring mistakes Reading were never in with a genuine chance of leaving the Hawthorns with a result.

Jonas Olsson marshalled his defence in his now accepted manner. Commanding? You bet your life! So why oh why did the TV picture performance argue to the contrary? Therefore it must have been me and those fellow supporters who obviously didn’t appreciate what we’d watching and complaining about!

But again, like every fan I was happy to harvest another three points to  keep ourselves in a Champions League spot (!) even though the possibility is so remote it isn’t even worth dreaming about.

On to the League Cup and from everyone – the players, Steve Clarke, the board and supporters, there were optimistic feelings this could just be the opportunity. Welcome back to Liverpool. We’d beaten them in the opening game of the season so why not this time? Especially when Brendan Rodgers took the opportunity to blood a team of youngsters including a 16 year old.

Steve Clarke had also made changes but nothing as remotely brave as his fellow manager. GREAT START! Three minutes and a goal from the recalled Gabriel Tamas following a slip by the Liverpool keeper set the wheels in motion, and for the opening 15 what was there to worry about? Well, for every Baggies fan, whether having paid for the privilege or listening to a full match radio commentary, there had been a major fatal worry. This was confirmed by Steve Clarke, who told the media “We allowed them too much space, we didn’t close them down, as I told the players at half-time”

A 17th minute equaliser, following a rare mistake from Ben Foster, and it was the Kids from the Blackstuff begining to believe they could more than compete as they had the best of the first 45 minutes. The second half saw both sides having chances to win the game but with just eight minutes looming before extra time and a possible penalty shoot-out, it was the strains of You’ll never Walk Alone that surely turned the possibility of a second Hawthorns defeat being admonished. So no Cup run – that will have to wait.

Now on to Sunday’s Greed League fixture. THE one that really counts for supporters of both teams, providing they are of a certain age. Aston Villa away. Rivals from way, way back and the team that will be more than happy to reverse the past few meetings between the clubs.

Prospects? Well, whatever happens Albion will still occupy a higher league placing and I’ll take that for a start! Will the Baggies put the Liverpool result behind them, go out and plays as they can, or will the Villains, buoyed by their tremendous cup win at Manchester City, feel this is the chance to close the gap?

Both sides will naturally say pre-match “We’re confident we can win this one.” Which, of course, is true. But again I’ve seen so many matches of contrasting fortunes down the years that I know only too well a result at Villa Park is always one to be enjoyed.