It’s likely to be interesting, if nothing else.

Originally formed in the late sixties, the band toured and recorded on and off, enjoying considerable success in Europe, until splitting in the wake of their successful appearance at the 2005 Isle of Wight festival. Last year the band reformed, originally for a one-off live recording which has been released on DVD, and are currently once more touring the UK. Support is from eighties prog rockers Solstice.Tickets £18.50.

On Sunday there’s what promises to be a memorable night when Marc Almond appears at the Assembly. The former Soft Cellist’s show features torch songs from such notables as Jaques Brel, Lou Reed, David Bowie and Scott Walker as well as his own compositions. Tickets £22.50. 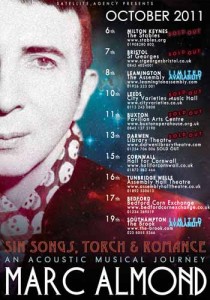 On Sunday the Assembly hosts the UK’s first female tattoo artists show, featuring fifty of the world’s top exponents of the art, with exhibitions, trade stalls and live bands. Tickets £8.

For further details, contact the venue on 01926-311311 or www.leamingtonassembly.com Also bear in mind that weekend gigs start early due to the Cortina Nights and Assembly Classics nights afterwards.