Fast-paced and energetic, and with a cast where children outnumber adults, this production is packed with festive spirit. The big song and dance numbers do not disappoint. Neither does the set of twinkly stars and sparkling presents. Stunning scene changes in the second act add an extra wow factor, whilst verbal and physical humour carry the show along.

Undoubtedly, it is the children who make the production. Playing the pupils of two primary schools, St Bernadette’s, an under-funded, under-privileged school, and Oakmoor, a private school for the offspring of well-heeled parents, they convey the message that there is potential in all. A scene using a bunk bed is nicely staged: as children emerge from duvets, we are reminded of childhood dreams, and that with love and support these can be made real. In another staging triumph, Star, the smallest at St Bernadette’s, played by Matilda Flower, attains her goal as she swings high on a giant star in the school’s nativity play.

Relationships between children and adults are well developed. Mr Poppy, the empathetic and interested teaching assistant, gains their affection and commitment, whilst Mr Maddens, more dismissive of their abilities, is less able to get them engaged. 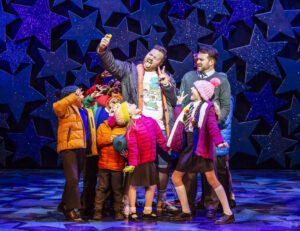 The city of Coventry also plays a starring role, its diversity displayed through staging depicting mosques and temples, churches and high-rise. As the scene is transformed into the majestic ruins of the old Coventry cathedral, it is wonderful to see this previously uncelebrated city (certainly not before its City of Culture status) come into the limelight.

But high jinks aside, the show could make more of its pathos through changes to tempo and volume. Ollie, played by George Bakel, is desperate to play the part of Joseph in the play, in the hope that this will bring his separated parents together to see him. Finally, his wish is granted, but the moment is given too little attention, and we lose its significance. Mrs Bevan, headmistress of St Bernadette’s, played by Jemma Churchill, has a change of heart when she realises it is the children who make up the school, rather than Ofsted reports and budgets. But again, the weight of this is diminished by the pace at which the action moves on.

Billy Roberts, as Mr Maddens, and Ben Lancaster, as Mr Poppy, have rich voices, which deserve more space than they are given. Matthew Rowland, as Mr Shakespeare, their evil adversary, gives a marvellous Alice Cooper style performance as King Herod in Oakmoor School’s competing nativity play. But sometimes the singing of the wider cast is harsh on the ear and overloud. Songs tend to merge together in wall to wall sound with little respite, and the impact that comes from contrast is reduced.

In a strong cast, Ben Lancaster as Mr Poppy stands out in particular. His versatility and humour fully convince us that his bond with the children is real.

The production was directed, written and composed by Debbie Isitt. It was designed by David Woodhead.

Nativity! The Musical is at Birmingham Rep until 7th January. Further information here.