You’ve been with the band for ten years. Is there some sort of age thing when you become too old to be a Beatle, the idea that Paul was only 28 when the band split so you have to leave?

“Not as of yet. Who knows – that could happen. We’re all of us wearing out slowly and I’ve always thought that I don’t want to be on stage with people saying ‘It’s time for him to pack up’. I still want to do it the utmost justice.”

The Bootleg Beatles have been together for over forty years. When someone leaves do you get the sort of controversy the Beatles got when they sacked Pete Best?

“I don’t think so. When Neil Harrison, who was the original John and now runs the band, left there was a bit of talk because he was the first of the originals to go and I think there was some speculation about how it would go.”

It must be easier for you to bring in new members because you’re more of an act, whereas bands lose originals and their credibility goes. But you’re more at the idea where nobody would go to a stage show and expect to see the original actors.

“With the Bootleg Beatles it’s slightly different in the sense that we aren’t responsible for any music. We didn’t write or create anything. When you’ve got a named act who made a particular recording, that’s what the world has come to expect, when those line-ups change that has more of an impact. But because the Bootleg Beatles are only ever paying homage to someone else it’s a bit more forgiving. If you see Grease – the Musical, it’s not going to be the same people as ten years ago but you won’t enjoy the show any less.”

You play bigger venues than the Beatles did. Symphony Hall this December, for example.

“We’ve played some incredible places, some lovely venues. Symphony Hall, the Christmas tour is always special, the atmosphere is going to be great. We take a lot of fuel when people are up for a good time. We get swept along with that.” 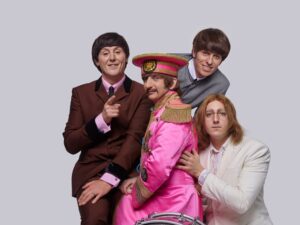 Do you find you get real hardcore Beatles fans in your audience?

“It’s a cross-section. Most years we change the show around and when you’re writing the show you alway have to bear in mind that you might get Dave and Janet who are diehard Beatles fans and they love it but they’re going to bring their mum, dad, kids and grandkids whaever who might not be fans but like the songs, so you have to have content that pleases the diehards and also the others who are coming along with them.”

I saw you at the Stone Valley Festival in the summer. You played to this audience of punks, skinheads, mods, the whole array but you stormed it because everybody knows every Beatles song.

“There was nobody more gobsmacked than us at that. We were wandering round watching and thinking ‘Good grief, are we playing here?’ We were totally different to all the other bands and we were thinking we were out of our depth then lo and behold, we went on stage and the crowd loved us. We went on between Bad Manners and the Boomtown Rats and it was amazing.”

It helps when everyone knows all your songs
.
“It can be a blessing and a curse. If you get it wrong everyone knows but also when you nail it the crowds love you.”

On that subject, the Beatles must have more anoraks than any other band in history.

“Oh, absolutely. I would consider myself to be well into them and I know a lot of the details but I get fans who tell me things I’ve never heard of. We had one guy when we were playing at Harrogate who came backstage and told us how accurate we were, then he said he should know because he saw the Beatles at the same venue and showed us photos.”

You obviously take a lot of time and trouble with writing the show, then getting the costumes and sets right but it must be annoying when others call themselves tributes when they’ve got a wig and a couple of backing tapes.

“It is a shame when people don’t put that level of heart or attention in. We’re all massive fans of the Beatles and I think that’s the essential key ingredient. I couldn’t do, let’s say, an Abba tribute, I’m not putting them down but I couldn’t do that convincingly because Abba aren’t my passion. It is annoying when you get people hopping on the bandwagon. I’ve seen some solo singer who does a show and the first set’s Kylie, the second set’s Madonna and the third’s Shania Twain or somebody. How people can do that I don’t know.”

You can criticise tribute bands for not being original but they do get people interested in live music.

“We’ll get older people who were around in the day and they might bring their grandchildren who’ve got no chance of ever seeing the Beatles. We’re the closest they’re ever going to get and why should we taint their ideas of the Beatles? And they might start liking that sixties music which to me was just a great era, and great music will always live on.”

Finally, I have to ask this. When you do leave the band will you be thinking of the obvious step and doing a Wings tribute?

“I don’t think so. Once I’ve finished I’ll probably steer away from performing the Beatles. For me it was all about the band it was never the same afterwards. They were all brilliant in their own right but it was like the ingredient of a cake. The cake might be lovely but you wouldn’t think of putting a spoon in a bag of flour.”

The Bootleg Beatles are playing Symphony Hall on 8th December.