Rob Golding, a former Birmingham Post business editor who went on to become a leading automotive analyst with a London-based investment bank has died aged 72.

During a successful business career, Rob worked on Ford’s 1989 acquisition of Jaguar – hailed as one of the financial deals of the decade.

For many years Rob (pictured) was a member of The Guild of Motoring Journalists and fellow-member Mark Bursa, paying tribute on the Guild’s website, said: “Rob had a remarkable career as both a writer and automotive analyst, and excelled at both disciplines. He possessed both a deep knowledge of the automotive industry and the rare gift of turning workaday business or technical topics into sharp, entertaining copy.

“His long career included spells as business editor of the Birmingham Post, and editor of The Engineer, before becoming editor of Car magazine in the early 1980s. However, this was not to last, as the City had begun to notice that Rob’s knowledge and analytical skills transcended those of a mere writer. 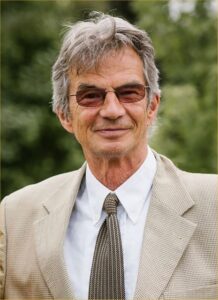 “Rob became a full-time automotive analyst in 1984, rising to become director of automotive industry research and equity analysis for SG Warburg. While there, he worked on Ford’s 1989 acquisition of Jaguar, one of the deals of the decade, and was voted the UK’s top auto analyst on a number of occasions.

“He pulled no punches either – as a young reporter I remember attending an automotive dinner in the City shortly after the ‘Black Monday’ stock market crash of October 1987, where Rob became embroiled in an animated public argument with dealer group boss Sir Tom Cowie, over whether it was City analysts such as Rob who had caused the crash – a position he defended forcefully and eloquently.

“Rob returned to journalism in the mid-1990s as a freelance writer, deploying his incisive knowledge for outlets such as Automotive Management and Just-Auto. It was a joy to watch him in action, extracting detailed information from board-level directors, thanks to his ability to ask the hardcore financial questions they were not expecting on a press trip.
“He also wrote a series of books on the history of Mini, most recently in 2007, covering the 50-year history of the brand with great clarity and readability.

“Rob was also great company, both on press trips and socially, where he’d like nothing more than putting the world to rights over a beer and a curry, or better still, a day at the Oval, watching the cricket.

“Sadly, Rob began to be afflicted by early-onset Alzheimer’s, bringing about an early retirement in 2015. it was painful to see such a bright and fearless intellect so cruelly dimmed in such a way.

Rob’s daughter, Melanie said: “Alzheimer’s really robbed us all of so much dad and grandad time for which I will always begrudge. He really was a legend!”

A memorial is to be held at Mycenae House, 90 Mycenae Road, Blackheath, London, SE3 7SE at 2 pm on 3rd December. Rob died earlier this mont.

If anyone would like to donate to the Alzheimer’s Society a memorial page has been set up by Melanie here.