The CBSO dazzle in the November gloom, watched by Simon Hale.

In contrast to the gloom and drizzle of an autumn afternoon, summer seemed to have returned in all its glory within Birmingham’s Symphony Hall. Here, the City of Birmingham Symphony Orchestra gave a dazzling performance of popular classics under the baton of Elena Schwarz, the young Swiss-Australian conductor who was making her debut with the orchestra.

Paul Dukas’ The Sorcerer’s Apprentice, with its childlike connections to Walt Disney’s Fantasia films, seemed to cast the perfect spell as the introduction to this thrilling matinee concert. The woodwind and brass players were notably on top form in this piece that so richly conjured up the story of an apprentice sorcerer left to his own devices, with all the tensions and comic disasters that brings. 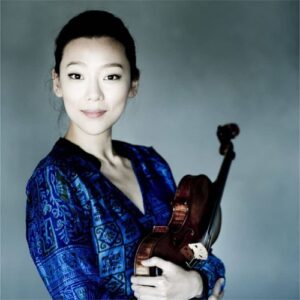 Antonin Dvorak produced one his most joyful works in his Eighth Symphony, full of folk tunes, birdsong and lyricism, which the CBSO conveyed with great passion in a breath-taking performance.

As Schwarz said in her introduction, the Eighth was Dvořák’s first symphony written in G Major, yet it starts in G Minor. She was clear, precise and rhythmically strong as she conducted the orchestra through the various passages from broody darkness to storms and sunshine.

Sergei Prokofiev’s Second Violin Concerto was also on the bill with German Clara-Jumi Kang as the soloist playing a 1708 Stradivarius, loaned to her by the Samsung Cultural Foundation Korea according to the programme booklet. She performed with the BBC National Orchestra of Wales at this year’s Proms to great acclaim – and it was the same for this her CBSO debut.
Kang excelled in bringing out the delicacy and romanticism in this beautifully melodic work, all the time in perfect harmony with the orchestra. She even wooed the decently sized audience with a Bach solo as an encore.

The CBSO returns to Symphony Hall on Wednesday, November 23rd with a varied programme of music entitled Birds of Paradise that includes Vaughan Williams’ The Lark Ascending with Tamsin Whaley-Cohen as soloist: cbso.co.uk.