Three years after moving away from Birmingham, Fritillaries are bringing their tour show back to the Kitchen Garden Cafe, Kings Heath, on 8th September. They’ll be playing as a four-piece stringband, in one of only four shows, with Kit Massey (Aphex Twin, Anna Calvi, Pete Tong) on violin and Andy Hamill (Laura Mvula, Annie Lennox, Martha Reeves) on double bass, plus support and harmony singing from Philippa Zawe. 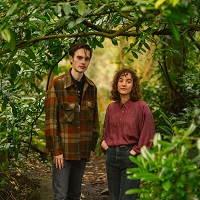 Playing together since childhood, Hannah and Gabriel share a unique intimacy and ability to draw audiences into their world. Their debut album – about places and people missed and found in isolation, and things found growing when we dig down into spaces the light doesn’t reach – was released on Pear O’Legs Records in July to widespread critical acclaim and support from BBC Radio 2 and BBC 6 Music.

RNR magazine noted their “youthful energy, freshness and cliché-free approach to roots” with Cerys Matthews describing it as “wonderful” and Folk Radio UK as “an enthrallingly scenic, tranquil and fruitful debut … capturing the purity, inventiveness and talent of the duo’s playing”.