Regular readers will know that we’ve got quite a bit of time for Geno Washington, so when the opportunity came up to interview him after his memorable set at the Cornbury festival, it was time to hightail backstage and talk to a man who’s stolen more shows that just about any other singer.

Not only is Geno one hell of a performer, he also has the sort of grin and infectious laugh that can light up rooms, which is another reason for his never-ending popularity. How he’s managed to keep going for so long is beyond the realm of us mortals although I did wonder that like the earlier great bluesman Robert Johnson, perhaps there’s a crossroads somewhere in the deep south where a pact was made with the devil. The very idea started that great booming laugh off again.

“I’ll do it as long as I can. You know, my health, I’m recovering from a stroke. I got arthritis in my hands but luckily it didn’t affect my voice.”

You just did a more bluesy set than usual. Was that about knowing what sort of audience you were likely to have here? 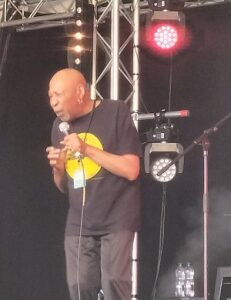 “I still have the Ram Jam band but I like doing blues and I try to give the audience the sort of blues that they’d get at a juke joint in the States, I present it that way. I got the Yo Yos who are really just the Ram Jam band without the horns. The Ram Jam band, we party very hard. The promoter here saw us do a Yo Yos gig and he loved it. He said give me the Yo Yos and that’s good enough for me.”

The years are going by and as many of his contempararies are no longer around, you might call Geno the last of the original soul brothers. His answer is, naturally, a bit more reflective.

“Yeah, haa. You don’t find them like you used to. You know what I mean?”

There’s been talk that this might be the final year when Geno Washington lights up the stage.

“Well, I was gonna but promoters keep saying, ‘Don’t do that’. I’m going strong and I’m trying to deal with the stroke but they’re telling me, ‘You’re doing great, man’ and ask me what I’m going to do – sit at home all day watching television? They’re trying to tell me, ‘Don’t do that, we need another date from you’.”

It’s not just the promoters. Whatever would all those mod all-dayers and scooter rallies and sixties soul gigs do without a Geno Washington set? How would they cope without their Godfather? The question sparks off another burst of laughter.

At Stone Valley last year, there were thirty-nine acts over three days and when anyone was asked who was the best, as soon as your name was mentioned everyone was smiling and saying, ‘That’s the one’. Do you prefer coming on early and blowing everyone else away, or would you rather play a late night juke joint?

“I like that. Coming on early because we try, the crowds are usually nice, and accepting us and it stops you from going through the motions. Youy got to do it, you know what I mean? No ‘Well, we played this show a thousand times, let’s just do it’.”

How many shows do you reckon you’ve done over the years?

I reminded Geno of the story he told onstage about lending Arthur Conley of Sweet Soul Music fame fifty dollars, only for Arthur to die the next day, before he could pay back the money. The recollection causes Geno’s eyes to light up. 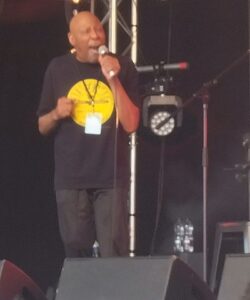 I ask if the story was true. Geno looks straight ahead and in the deadpan style of a born comedian, replies, “No. I lied,” before, like everyone else within earshot, falling about with laughter.

There must be at least a million other stories of sixty-odd years in the music business and probably about three of them are clean enough to get told on stage.

“Exactly. That’s why I don’t tell ’em. Man, you remembered…”

The weather must have helped today. The sun has been absolutely blistering and everyone’s been in the mood to party.

“There you go man, there you go. I’m glad the weather is nice and that’s how a festival should be. You got people singing, shouting.”

Steve Winwood’s just started up onstage. I’ve got one legend in my right ear and I’m meeting another one here. That’s a festival. And where is home to you now?

“England. London, I’m crazy about London. They will bury me in England, no doubt about it. Everything I love is here in England.”

Geno Washington. May you continue to kick ass for a long, long time.

The reply could have been heard back on the stage. “Yeah. Yeaaaaaaah!”