Champion, the official anthem of the Birmingham 2022 Commonwealth Games, out now.

Iconic reggae band UB40 will celebrate a momentous 45 years in the business with a brand new album‘UB45 and a UK and Ireland tour. The debut single from the new album Champion has been unveiled as the official anthem of the Commonwealth Games 2022. The track is available to stream on UK music services here and the tour is now on sale.

Champion, was written by UB40 for the new multi-artist album On Record as part of the Birmingham 2022 Festival and features Dapz on the Map and Gilly G. On Record, commissioned and produced by Birmingham Music Archive, features eleven original songs exclusively written and recorded by new and established city music talent. 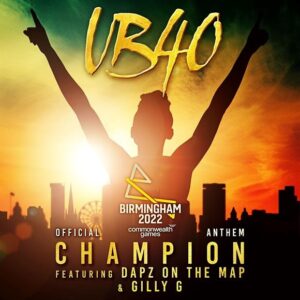 Champion is the official Commonwealth Games song and celebrates the Games coming to England for the first time in twenty years. It’s also a celebration of Birmingham. It is the first single from UB40’s new album UB45 which will be released early 2023. The album is the ultimate celebration of UB40’s past and present featuring new original material and also a reworking of some of the band’s classics and greatest hits, performed by new frontman Matt Doyle.

Robin Campbell said, “We are proud to be representing the Birmingham 2022 Commonwealth Games with the official anthem Champion. Birmingham represents the best of global Britain and it is our job to showcase this to the world. The song is about celebrating the cultural diversity of Birmingham. Birmingham is truly a city of champions!”

Matt Doyle added, “Champion is all about positivity. It’s about being uplifted and putting that energy into whatever gets you up in the morning- whether it be music, art or sport or whatever it is. It’s about doing what you do best and excelling at that, celebrating being a champion.”