The final fling, the last hurrah, call it what you like but this has been billed as the final Cornbury festival, so after being put back for two years there was a lot of making to be done, both up for lost time and the most of three glorious days in the middle of the stunning Oxfordshire countryside.

As we arrived the familiar soulful sounds of Stone Foundation were drifting on the breeze, a perfect prelude for what was to be three days of music, more music and even more sunshine.

By the time we got properly settled the Shires were on the main stage and playing their well-received blend of British country. Don’t Get Drunk on a Friday Night was probably a needless warning given the audience demographic, although that and the rest of the set was perfect as the crowds grew while the sun shone.

The Darkness were up next. Coming onstage to a sea of bombast and dressed like they were off to fancy dress day at a test 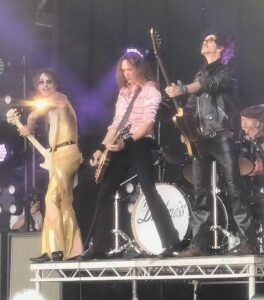 match, nobody has ever managed to work out whether this is a serious band, or the most successful parody in history. They’re certainly a photographers’s dream, throwing more rock god poses in one four minute power ballad than many others can muster in a career. Singer Justin Hawkins throws in a few warnings about the perils of fame, the power chords continued and their set concluded with the Big Hit, and the Christmas Hit. Naturallly, the crowd loved them.

Friday night headiner James Blunt is certainly a serious musician, even if he doesn’t take himself too seriously. Almost as famous these days for his Twitter profile as for his music, James has a loyal fanbase who sang along, cheered his every word, laughed long and loud at his every wisecrack and made for a pleasant end to day one.

Saturday dawned and as any seasoned festival goer will tell you, the joy of these events isn’t in the headliners, it’s coming across someone you’ve never heard before and realising that they’re, not to put too fine a point on it, bloody brilliant. The first sighting of this occurrence came with the unaptly-named Captain Accident & the Disasters, who did a set on the Songbird stage on Saturday afternoon. Reggae and ska and sunshine were an unbeatable combination and even got the crowd dancing depsite the heat.

They were followed by the also-unaptly named Beans on Toast, who might be mistaken for a novely act but are in fact singer Jay McAllister and his mate on piano, swearing a lot in between some well-crafted, uplifting and thought-provoking numbers. (T)he(y) reminded me a bit of Chas’n’Dave in their serious moments.

In between these, it had been time for a stroll down to the main stage for Police Dog Hogan, whose country, folk, bluegrass, call it what you like has given them a reputation for being able to leave a lasting impression on such an occasion. Again, it was heat versus music, and again music won.

Even with so much great stuff flying around there has to come a time for such side issues as eating and drinking so I missed most of the Get Cape Wear Cape Fly set, and was back at the Songbird for the first big name there, the veteran Andy Fairweather Low. Some rock’n’roll standards, some of his own stuff and a singalong hat-trick of Bend Me Shape Me, Wide Eyed & Legless and If Paradise Is Half As Nice ended another very enjoyable set from the most dapper man for miles around.

Over to the main stage and time for the Waterboys. By now we were well into the stage of knowing what you’re getting – there were plenty of anthems to sing, the stage presence of Mike Scott is easily capable of lifting this size of audience, Whole of the Moon is a festival classic and really that’s all that needs to be said.

Up the well-trodden path to the Songbird and headliner Mica Paris. The shadows were beginning to lengthen and there’s more 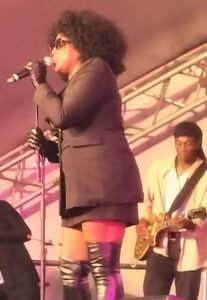 shade here than further down. An evening of cool jazz funk and soul was in store and if you expected that you weren’t disappointed. A few early sound problems were soon ironed out and a mix of originals and soul clasics got the large and appreciative crowd going. Sadly there was no time for an encore due to delays and the demand that everything else had to end before the arrival of the main attraction of the night.

Bryan Adams is perfctly suited to headline an event of this type. He’s got his hardcore fanbase who swelled the Saturday audience and he’s got enough well-known songs to entertain the rest of us. And entertain he did, with a tight, well-worked runthrough of his greatest hits. Summer of 69 was a stormer, Everything I Do a singing and holding hands anthem that in the old days would have got the lighters out. As it was, we had to make do with a forest of cameraphones and a stroll back to tents, cars and taxis.

I’d like to say that Sunday started early but I’d be lying. These days a lengthy day listening to music in the sun is followed by a lie-in and a gentle journey to get the end of Ferris & Sylvester’s set on the main stage before strolling back to the Songbird and Hollie Rogers. Here was another unknown to my ears who I’ll definitely be watching again. A singer/songwriter from the bluesier end of the folk spectrum, she was part Carole King, part Janis Joplin, part a few others I couldn’t bring to mind but mightily talented and definitely one to catch on another day.

Back down the hill and the nostalgia kicked in with Altered Images, Clare Grogan talking about her seventeen year-old daughter to make a few of us feel even older. An set of eighties pop perfection and they were gone, setting the mood just perfectly as the sun continued to beat down. Did I mention how hot the weather was?

Then it was time to head back to the Songbird stege for the man these events were made for. We’ve written enough about Geno Washington before now, and today was no expection. Without his Ram Jam band’s horn section, Geno this time was more blues than soul, not that the crowd were bothered. Heading towards his eightieth year, there’s still no-one better at coming on midway through a festival bill and stealing the show.

And talking of legends the Stacks band are Cornbury regulars. They always have a special guest or two up their sleeves, and 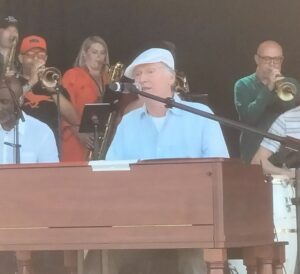 today was no expection. First Madeline Bell came on to run through a few classics and then to finish off there was a guest spot from Great Barr’s finest, Steve Winwood. His own Higher Love, a couple of covers and then Gimme Some Lovin’, with THAT voice drifting away into the Cornbury air. What a performer.

Other business got in the way for a while but I could hear Ronan Keating entertaining his fans on the main stage, and them joining in a few times. Then the Christians, the final band to play the Songbird, put in a polished set of polished soul, perfect for the setting,the time and the occasion.

As the sun was beginning to set the customary Cornbury hot air balloons drifted across and then we had the final act of the festival, the final act of any Cornbury. And there could be no-one better than Jools Holland fronting his orchestra, boogieing, woogieing, skanking, good-timing along as the night wore on, the shadows lenghened and the party got into full swing. Fairground Attraction Eddie Reader got involved for a few numbers, some other bloke joined in and Ruby Turner helped finish the night off in fine style. Enjoy Yourself, it really is later than you think.

Of course I had a few regrets. I missed Chris Difford as he clashed with Steve Winwood, and at the same time there was a band doing a Santana song on the Riverside Stage that I would loved to have heard more from. I’d like to have paid more attention to the Rising Stars in the Caffe Nero tent on Saturday and known what Tuneless Choir were like. I’d like to have watched the Morris dancers oN Sunday. Or perhaps I don’t have that many regrets.

What was famously billed as “England’s lovliest festival” had gone out with a bang, and that wasn’t all down to the fireworks. Never particularly groudbreaking, but a treat from start to finish, if this really is the end it will be sadly missed.

One thought on “No sleep ’til Cornbury”