Dave Woodhall gets out and about for the Stone Valley Festival.

It’s off our usual patch, but I’d heard such good reports about Stone Valley that I had to make the effort, even if it was just for the middle of the three days their southern version was held over the Bank Holiday.

It was taking place at a farm in Hertfordshire about ten miles off the M25. Not the easiest place to get to, but once arrived getting parked a five minutes walk from the entrance was a breeze, and getting into where the music was taking place even easier. The staff are friendly, the security was laid back and there was a sensible attitude to what you could take into the arena – a welcome change from the sort of restrictions that have made festival-going more onerous over the past couple of summers. The only potential problem came when a security man tried to take my lunch, but that was with a smile because because he was hungry. Compare and contrast with the type of festival where so much as a bag of crisps is forbidden, in case it might eat into someone’s profits.

Anyway, getting there had been so easy we were able to catch most of the opening set from first band up, the Scandals. Hailing from the north-east, they performed a lively, crowd-pleasing covers set of Britpop and Stereophonics/Kaiser Chiefs-type anthems. In a similar vein were the next band up, tribute band (guess who to?) the Small Fakers. Both acts did what they 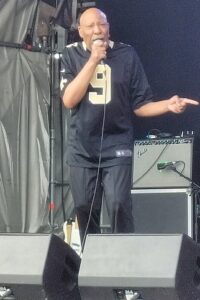 had to, then with the sun out and the arena filling up it was time for the first of the big names.

Geno Washington defies many things, mostly the ageing process. Now approaching eighty, he’s slowed down a bit since his funky butt days, but the voice and above all the stage presence are still there. There’s nothing wildly original about Geno; he performs a set of soul classics and probably hasn’t changed much about his show in five decades, and his audience wouldn’t have it any other way.

Geno’s been going since the glory days of Stax and Motown, the performers he’s worked with are legendary and he has a tale to tell about every one of them. As he said of Arthur Conley, “I lent him fifty bucks and he said he said he’d be back at ten the next day. I didn’t trust him so I turned up at eight and he was already dead.” Sweet soul music indeed, and Geno left the stage to the audience chanting his name. This is being billed as Geno’s farewell year, and if that’s true the world of live music will be a sadder place.

The Rezillos had their farewell gig over forty years ago. Then they kept coming back, going away again and now they seem to be here to stay, which is no bad thing for anyone with an hour to spare and a liking for fast, ludicrously catchy two and a half minute pop songs. The band were tight despite Covid-enforced replacements and Fay Fife still has an astounding voice that could handle opera as well as Top of The Pops.

Stone Foundation were up next. They had a difficult couple of acts to follow and they were okay. Not brilliant, their soulful, jazzy sound seemed more for listening than for dancing. The crowd enjoyed them and they played the part of the lull before the storm well enough.

Then came the Dualers, who’ve built a reputation as a goodtime party band with an infectious ska sound. Perfect for weddings, funerals and festivals, they took full advantage of the favourable weather conditions and the mood of the crowd. While a lot of ska bands are content with playing Madness and Bad Manners covers the Dualers have got their own sound although the biggest reception was reserved for the set closer, a version of the classic Monkey Man.

Maybe it was because of the Jubilee, or perhaps there were just a lot of mods and scooterists in the audience, but there were 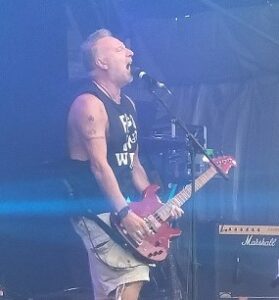 Union Jacks and sundry symbols of patriotism in abundance all day. I did wonder how they’d receive Peter Hook, given his leanings and his general arsey attitude, but then again he did have a few tricks up his sleeve. Sweet Caroline and Hey Jude had been played over the PA before his arrival. “The two songs I hate most,” he announced, with a bit of swearing added. “Things can only get better.” And they did.

A few Joy Division songs, followed by some New Order and the inevitable, climactic Love Will Tear Us Apart, a haunting melody about a fading relationship that’s been reborn as a festival anthem. Watching him and the Light, you learn a couple of things about Peter Hook. The first is that he can sing; if you didn’t know different you’d have a hard job to think that these songs had been written and arranged with anyone else in mind. The second is that he’s an almighty frontman. I can’t think of many bass players who can take the stage as he does, yet it all seems so easy. And the songs, reworked, sounding different and yet instantly recognisable. That’s a genius for you.

Headlining were the Stranglers, a band who incredibly I’d never seen before. I’d loved their early work as a teenage punk (albeit one who wasn’t rebellious enough to defy my mum and watch them live), then for some reason I’d never got round to watching them later. Still, here they were and like the fella earlier on, they’re on the last lap of a memorable and lengthy career.

Unfortunately, they were a bit of an anti-climax after what had gone before. Maybe they were having an off day, maybe I was a bit tired after hours of sunshine and predominantly foot-tapping music, but this didn’t seem to be the Stranglers’at their best. The sound was too bass-heavy and it didn’t help that they played a lot of stuff that would be unfamiliar to all except their hardcore fans – when you’re headlining a festival on what’s billed as your final tour, I can’t see the point of playing tracks off your latest album. It might have been just me, but then again a fair number of the crowd were leaving well before the end. It was a disappointing end to an enjoyable day, although I would probably have been in a minority amongst the Stranglers’ faithful.

That minor quibble apart, it had been a successful start to the festival season. Leaving was as easy as getting there, and the Midlands version of Stone Valley in August will very likely have a couple mote attendees for the whole three days.