How do you define success? This is the question deep at the heart of Sara Pascoe’s new touring show, Success Story. You’d think that a comedian who has been at the top of the UK stand-up game for a decade, had her own comedy series, Out Of Her Mind, airing last year, as well as appearing on the nation’s bookshelves with bestselling tomes such as Animal and Sex Power Money, would pretty much have all the answers about glory and triumph. Far from it.

“What I want to explore is how do we define success and when do we define it. Does it change with age, do we only want things we can’t have? When we attain our goals, do we move the goal posts and become unsatisfied with what we’ve got and want something else instead? I’m forty now and it’s a reflective time; it feels like a very adult age. Looking back on my life to when I was fourteen, I really wanted to be on television. That’s where I work now but is it what I imagined it to be?”

Simultaneously, Sara had a job which was generally considered as successful while undergoing a fraught personal chapter which would be deemed contrary to that vision of success.

“I was having years of infertility and when we were going through IVF, the word ‘success’ was used a lot about the process. So, I wanted to contrast that with these other things that are seen as representing successful lives such as finding someone we love and having a family. There are a lot of areas being covered.”

Perhaps all this might sound a bit heavy, but Sara is not a comedian to forget what her audience needs so there’s a number of daft stories to flesh out her central thesis. Such as the time she terrified Pete Burns, the late figurehead of 80s band Dead Or Alive and later reality TV star. 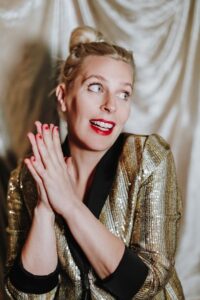 “He did a reality show where he was looking for a PA and I was told I would get fifty pounds cash in an envelope if I kept accosting him in the street. So, outside a coffee shop in Soho, I had to pretend to be a superfan and hug and kiss him and say how much I love him and see how all these potential PAs would deal with this crazy, neurotic fangirl. At the end of that day, he said that I scared him which just showed how good my acting was. That show is sometimes repeated on an MTV channel and I’ll get a text or a tweet saying ‘Oh my god, I had no idea you were such a Pete Burns fan’.”

Now though, Sara doesn’t have to pretend to be anyone else. She’s soon about to be back among her people again, entertaining fans who may have come to her through earlier stand-up or from TV presenting roles in Comedians Giving Lectures or The Great British Sewing Bee. Those programmes have lifted her public profile as well as giving her a fresh perspective on her own life in stand-up.

“Comedians Giving Lectures can be like hosting a stand-up show, and I love it because these very high-status experienced comics are often doing brand new material because they’ve written a lecture for the show. For me, it feels like a gig rather than a TV programme. In Sewing Bee, I occasionally write jokes for the links, but you’re doing a joke for eight people who are really thinking about sewing; they’re not thinking about your pun on the wrap dress.”

TV prominence now ticked off the to-do career list, Sara is desperate to get back on tour. After the last couple of years when quite often the prospect of gigging across the country again might have seemed a very long way off, Sara Pascoe is certainly not going to be complaining about the rigours of being on the road.

“Yes, it can be tiring but when you’re in the dressing room before a show and you hear the hubbub of a busy room, you feel very lucky that people will come and see you at all never mind in their hundreds or thousands. There’s a description in Alan Davies’ book about how walking out on stage as a comedian is the closest you can get to being a toddler taking your first steps towards your excited parents. That’s the feeling comedians are trying to recreate by getting this huge round of applause from people who like you and are pleased you are there. That’s the side of it that’s addictive and compulsive.”

Whether success has eluded her or is never far from her fingertips, Sara Pascoe is always up for striving ahead and taking her comedy to the next level. There’s not a chance in hell that she is taking any of her, yes, let’s call it success, go to her head.

“No one likes to do a mediocre gig, or worse, a flat gig. Especially when you’ve earned an audience from TV work, the idea that they might come to see you for the first time and leave disappointed really keeps you going. At the end of a show, you don’t want a crowd going ‘Yeah, that was fine’. You want them to say ‘Oh god, do you remember that bit?’ And ‘I must tell auntie Susan about this bit’. You want an audience to be engaged in what you’re saying. When I watch comedy and want to text my dad about something that was said during a show, I know it was brilliant.”

Not too long now until people leave Sara Pascoe’s Success Story, desperate to tell their family or friends about the show they’ve just witnessed.

Sara Pascoe’s Success Story will be performing at Warwick Arts Centre, Coventry on 2nd December and the Alexandra Theatre, Birmingham on 19th March 2023.