Coaching programme aims to connect cricket back with the commmunity.

The Afro-Caribbean Engagement Programme, has officially relaunched in Birmingham following the overwhelming success of its inaugural launch last year. Delivered by Warwickshire County Cricket Board on behalf of the ACE Charity and the ECB, the programme focusses on increasing awareness and access to Cricket through Black communities and grass-root cricket clubs.

Following a 75% decline in participation from Black cricketers since 1995, the ACE Programme was set-up in 2020 by Surrey’s Director of Women’s Cricket, Ebony Rainford-Brent to not only address the issue, but also open up pathways to under-represented groups through from grass-root clubs to the elite. With ECB funding, the programme was able to launch last year in Birmingham as the first city outside of London to launch the programme. 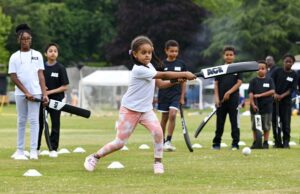 Hosted by Warwickshire County Cricket Board and specifically, Eaton Gordon, ACE Birmingham Lead and Community Cricket Development Manager for WCCB, the afternoon saw engaging and inclusive sessions delivered which aimed to inspire children of all ages to consider cricket as a sport to get involved with.

“To be involved again with ACE for a second year is just testament to the hard-work put in by the team and overall success of the initial Birmingham launch back in 2021,” said Eaton Gordon, ACE Birmingham Lead.

“Since our launch, we have had over 100 local kids join us across taster drop-in sessions and enrol for further sessions every Friday at Handsworth Cricket Club which has been amazing to see. There is a lot of love for the game and to see children either re-engage or engage with the sport for the first time has been amazing to see and be a part of.”

Stuart Cain, Chief Executive of Warwickshire CCC, said: “ACE has been the catalyst for re-igniting a love of grass roots cricket amongst Birmingham’s African Caribbean community, so it’s great to see it continue for a second year, but it’s a long-term project. Unless we get children playing cricket at local clubs, we can’t then develop their skills and love of the game so that the most talented progress in to the County pathway and potentially become professional Bears’ players.

“We can’t hide from the fact that there isn’t enough African Caribbean representation within professional cricket and this is our attempt to try and address that, so that the Bears do ultimately represent the communities we serve.”

The ACE Programme will be continuing to run community cricket sessions at Handsworth Cricket Club every Friday, 6.30pm-8pm.