Stand-in Hurricanes head coach Liam Welham praised his patched-together side’s intensity on Sunday, after they put a stop to a four-match losing run with a convincing home win against the West Wales Raiders.

The Raiders crossed the line twice through Callum Merritt and Ewan Badham, but offered very little in a tepid showing.

By contrast, the hosts were thrilling at times, and clinical throughout, marshalled by the effervescent Stead who pulled the strings superbly and led a team populated by players playing out of position to a professional win.

Welham said: “We were short of a few players, so had a meeting pre-match and discussed how there would be some playing out of position, and asked the team to grit their teeth and bear with it – and we came away with a very convincing victory.

“It was high on our agenda today to be tough in defence – we knew we could score points, we’ve proven that over the season. Today, straight from the off, we set our stall out and I don’t think they recovered from it. 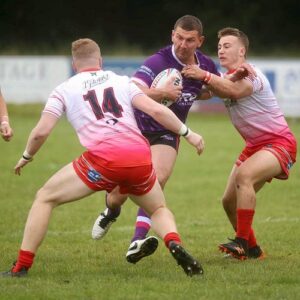 “The boys have stepped up massively over the last few weeks and matured a lot – hopefully we can carry that on next week and take it to Oldham.”

It was rookie winger Phillips who was the real story of the day with a professional debut to remember, bagging two tries.

The Coventry Bears academy graduate scored in each half in a match his side dominated from kick-off to the final whistle.

Hurricanes flew out of the traps forcing the Raiders into two goal-line dropouts in the first two minutes. That pressure paid off, with Stead’s bullet pass allowing Croston to finish.

Four minutes later, the Hurricanes struck again. After the visitors spilled a delicate Stead grubber, from the ensuing scrum the Midlanders simply popped the ball to Lawton who powered through the feeble defence.

For ten minutes the game got scrappy in the chilly, drizzly air, before Phillips’ moment to remember; finishing off a round of slick Hurricanes handling to mark his professional debut with a try.

The Hurricanes then started playing with confidence, zipping the ball down the left with Freeman cutting in to bag his eighth try of the season.

Just after the half hour, Stead once more set up Croston to double his tally for the game and the season.

The sinbinning of Benn Hardcastle just before half time sparked the Raiders into life, and they got off the mark moments later when Merritt impressively raced in from 40 metres.

But that was as much as they got during Hardcastle’s time out, as the Hurricanes shut up shop, before striking again soon after – Lawton taking a quick pass and finishing with ease.

If the Raiders were still clinging onto life, that score killed them off – but the Hurricanes weren’t done. Six minutes later, Stead found Dawson crashing through on a delightful angle, before taking the return pass and strolling home.

The visitors briefly flickered just after the hour, with Badham powering his way over from close range.

But it mattered little, as the Hurricanes made it to the half century mark with ten minutes to play, Stead and Croston combining brilliantly out of the back of a scrum to serve Phillips his second on a plate.

Hurricanes took their try count to double figures for the afternoon in the last minute. Irish international Peter Ryan looked to have crashed over only for a Raiders defender to knock the ball from his grasp. However, Cowburn was quickest to react to bag a try against his former side.

Ryan did get a consolation prize, coolly slotting over the conversion with the final kick of the game.