There’s been a lot of publicity over Johnny Depp and his crew splashing out a supposed £50,000 on a do at upmarket Broad Street Indian restaurant Varanasi, when Johnny was in town with his mate Jeff Beck earlier this week. 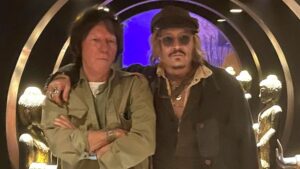 I’m not sure who his culinary adviser was (I could have done the job if he’d asked me) but Mr Depp could have had a real taste of authentic Brummie cuisine by buying 5,000 proper baltis with a naan as an accompaniment. Or perhaps more practically he could have entertained his party of fifty for around a hundredth of the price and got a few cans from the offie. That would have left the odd forty-nine grand to be donated to a local foodbank.

Perhaps Johnny Depp’s expensive shindig, and the way it was reported, says a lot about the man and our fawning attitude to A-list celebrities slumming it on the mean streets of downtown Birmingham.