If Henry VI tells of the vying for power between noblemen, Wars of the Roses (the RSC’s stage production of Henry VI Part III) focuses on the power struggles within families. It reveals much about how families without bounds can become breeding grounds for individualism at the expense of all others. And it reveals something of what we do in the name of our children, for better and for worse.

At the Battle of St Albans the armies of Lancaster and York face each other for the first time. Richard, Duke of York, contender for the throne, is victor. Henry, of the Lancastrian dynasty, is full of doubt about his legitimate rights and concedes his crown to York. Margaret, Henry’s wife, accuses him of failing in battle and disinheriting their son. Her authority visibly growing, she enlists help to raise an army to take on York. Successful in battle, she has his severed head mounted outside the city of York, so that York can look on York.

The turncoat Warwick deserts Henry and joins York’s three sons, Edward, George and Richard to have Edward crowned. Margaret, now armour-clad, enters into battle once more, her eye on her son’s inheritance, rather than looking out for Henry. The Lancastrians are defeated and Henry hauled off to the Tower of London. 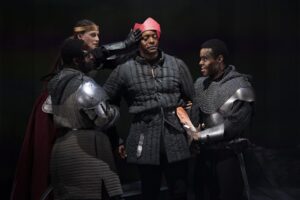 War of the Roses at the RST

Warwick changes sides once more, as does George. Once more the two houses fight: the Yorkists are victorious. Again, George switches sides and Margaret’s son is killed by the three York brothers. Her family is destroyed, her game is over.

Against the backdrop of battle, Richard ponders his future. Born with a disability, he sees this as determining his fate: a life of pleasure will not be for him. Counting off those he must first destroy, it is clear that seizing the crown is his goal. We see the future of another family torn apart at the hands of a self-absorbed individualist. Safe family havens, it seems, are no more.

The rise of Richard (to later become Richard III), is well delivered, the character gradually developing over the course of the play into its dominant force. Shakespeare’s depiction of disability as a sign of moral impairment is a difficult thread within the play: arguably, we now have a better understanding of disability as a social construct. However, Arthur Hughes, as Richard, draws the audience in. We are intrigued, and are more than able to question our responses to both the Richard and Margaret, who is non-disabled and yet equally evil.

Set and staging are the same as those used for Henry VI: Rebellion, and work equally well here. Foreshadowing of evil is conveyed through black and white projections, backdrops of stormy seas and sound effects. At times, projections of close-ups of men on the battlefield conveys the feeling that we are looking into their souls. Whilst references to current wars is extremely subtle, the presence of photographers hovering over the dead reminds us that the world has not yet found a way to live peacefully.

The production maintains its audience throughout and characters, from the weak and disempowered Henry VI to the dominant Edward, Richard and Margaret, are well developed. Edward is played by Ashley D Gayle, Richard by Arthur Hughes and Margaret by Minnie Gale.

Supporting the professional cast were several recent drama school graduates and members of the Shakespeare National group from Nottingham, and a number of the RSC’s Next Generation Act performers.

Directed by Owen Horsley, Wars of the Roses is at Stratford until 4th June. Tickets.