Power, that many-headed monster Power, and how its use and abuse ripple through the fabric of the world, disturbing social structures and corrupting those caught up in its swell. These are the themes which course through the RSC’s production of Henry VI Part II.

Shakespeare’s play is populated by characters who grapple with their hold on power. Noblemen surrounding the king, already powerful in their own right with their titles and their retinues, scheme to secure control over Henry. Amongst many, York is the main protagonist.

Others who lack power, such as Jack Cade, a lower class rebel leader, turn the populist and encourage their followers to revolt to gain more control. 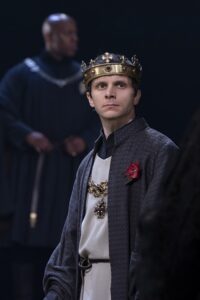 Women, in particular Henry’s wife Margaret, whose access to power is limited by her sex, manipulate the men around her to gain authority.

As for Henry himself, pious, averse to deceit and bloodshed, and perceived as weak by those around him, the weight of power is sometimes too much. Once the Duke of Gloucester, Henry’s uncle and Protector of the Realm during his youth, has been killed, Henry shrinks under the load. As he veers and vacillates, the country descends into strife and chaos. A metaphor for the current times, you might think.

The theme of justice also features in the play. Whilst many speak up for the need for due process, their actions speak louder than their words. Gloucester, generally seen as an honourable man, allows a dispute between a master and servant to be settled by a fight – whoever dies must be the guilty party. Jack Cade knights himself and declares all must call him Lord Mortimer.

The staging of Henry VI adds much to this production: black and white movie-like projections create an atmosphere of threat and malfeasance. Music is used to convey foreboding and apprehension, whilst the greys and blacks of costumes, varied only by the blood-red robes of Margaret and Cardinal Winchester, contribute to a binary sense of good and evil. Clever use of levels, within an unadorned set, contribute to the sense of power struggles: frequently Henry is at a lower level, with his associates looking down on him. The final image of York, standing tall and proud, whilst Henry wavers below, is particularly effective.

Performances seemed to take a while to bed in, and some of the actors’ words difficult to make out at times. However, not long into the first Act the production found its muscle, and the emotional depth of the characters began to emerge. Oliver Alvin-Wilson as York, Minnie Gale as Margaret and Mark Quartley as Henry VI stood out in a strong cast.

Supporting the professional cast were several recent drama school graduates and members of the Shakespeare National group from Nottingham, and a number of the RSC’s Next Generation Act performers.

All in all, this is a strong production which will, no doubt, develop further as the run continues. We are left pondering on the nature of power, and how our flawed egos lead to its abuse.

Directed by Owen Horsley, Henry VI Rebellion is at Stratford until 28th May. Further information.