Imagineer to take part in the Queen’s Platinum Jubilee Pageant.

Coventry based Imagineer are bringing all The Queen’s Favourites to the Queen’s Platinum Jubilee Pageant on 5th June in collaboration with Midlands-based artists and participants. Imagineer’s twenty-foot high Godiva will lead a procession of corgis, horses, swans and boats highlighting the ingenuity and industry of the West Midlands.

The Pageant takes place on 5th June to honour Her Majesty the Queen as the first British monarch to celebrate a Platinum Jubilee with 70 years of service. The Pageant, which will wind through the streets of Westminster and along The Mall past Buckingham Palace, tells the story of Her Majesty’s record reign and highlight how society has transformed during this unprecedented period. 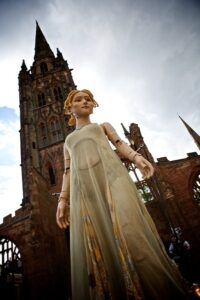 Leading Imagineer’s section, Godiva will be dressed in a new frock bringing with her gifts from Coventry, celebrating the ingenuity and industry of the West Midlands. She leads a playful procession which includes The Queen’s beloved pony Peggy and many of her favourite galloping, bicycle powered, horses including Royal Ascot Gold Cup Winner Estimate surrounded by a pack of mischievous puppet Corgis. Also powered by bicycles is Imagineer’s Cyclopedia carrying a Platinum crown in salutation to Her Majesty the Queen.

Imagineer will highlight the quirky annual ceremony of Swan Upping, the census of the swan population on the River Thames when young cygnets have their health checked by school children and continue the water theme with Bluebottle ‘on the seas’ the cherished sailing boat gifted as a wedding present to the Queen and Duke of Edinburgh.

Working with Pageant Master Adrian Evans LVO, Kathi Leahy and Jane Hytch of Imagineer will be joined by designer Trudy Rees-Marklew and makers including Lou Jones, Nadya Monfrinoli, Entify (Deb Mingham and Dave Wood) and Nick Martin to bring the section to life.

Kathi Leahy, Artistic Director, Imagineer said: “Being invited to participate in the Queen’s Platinum Jubilee Pageant will be an amazing experience for all the community participants, an experience that will stay with them for the rest of their lives. We are proud to be able to profile and showcase the creativity and energy of Coventry and the West Midlands Region to the rest of the world.”

The procession will also be made up of members of Critical Mass 2022, a brand new inclusive dance collective that will perform at some of 2022’s biggest events including Birmingham 2022 Commonwealth Games Opening Ceremony. Critical Mass 2022 is a collaboration between DanceXchange, Arts Connect and the Dance Development Leaders Group supported by Spirit Of 2012 as part of the Birmingham 2022 Festival.