Family secrets can have devastating consequences, especially in communities used to traditional ways of living.
In Leos Janacek’s opera Jenufa, the secrets within an extended family in a Czech village in the late 19th century are enough to lead to murder.

Welsh National Opera’s touring production at Birmingham Hippodrome, performed on a reduced-size stage, proved to be a powerful and heart-rending account of a woman desperate to avoid the shame of giving birth out of wedlock, scarred by the jealous half-brother of her fiancé and cousin, and controlled by a domineering stepmother who believes she know what is best for her. 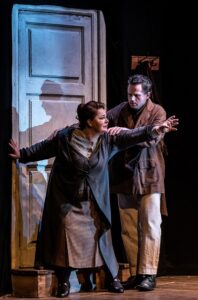 Australian soprano Tanya Hurst, taking to the stage as an understudy, gave a wonderfully nuanced performance in the title role on the only Birmingham date, her empathy with the spineless father Steva (Adam Gilbert) and skill in dealing with the impulsive Laca (Peter Berger) driving the drama forward.

All the lead characters were convincing, but it was Eliska Weissova who stole the show as the Kostelnicka, attempting to balance sympathy for her stepdaughter’s predicament with her own god-fearing sense of honour and morality. Her enduring torment after committing infanticide was reinforced in all its intensity by the powerful Janacek score.

Indeed, the orchestra under conductor Wynne Davies, another replacement, gave a terrific performance of the continuous dramatic and compelling music.

Although the opera may have had all the ingredients of a tragedy, it also glimmered with hope. Far from being a straightforward clash between good and evil, the production emphasised human frailty and redemption.

In the final scene you wondered how the relationships could survive after wedding day for both Jenufa and Laca, and Steva and Karolka (the mayor’s daughter) is interrupted by news that a baby has been found buried in the ice.

Having believed her stepmother’s story that her baby had died from an infantile cause, Jenufa recognises in horror that it is hers by its bonnet.

Kostelnicka’s confesses and is taken away to face justice, but you could understand the relief she must have felt by her unburdening, while the opera ended with a moving duet that left a message of hope that was worth the wait.