Dave Woodhall has an eighties moment at Symphony Hall.

Symphony Hall has played host to many world-class orchestras over the years so it was an appropriate venue to hear Go West celebrating their 35th anniversary by playing many of their best-remembered tunes, backed by the orchestal arrangements of the South Bank Simphonia.

The duo’s contemporaries Cutting Crew had opened the show with an enjoyable and largely uptempo set of their own, culminating in a lengthy interpretation of (I Just) Died in Your Arms, complete with some surprisingly Pink Floydesque guitar work, then it was time to enjoy some old songs performed in a new way. 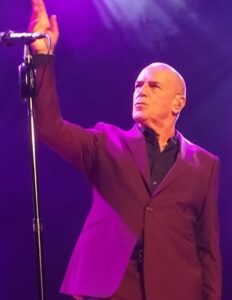 Opening with the 1985 hit Don’t Look Down, this was a set short on surprises but with enough in the way of novel interpretation to interest the casual listener without alienating diehard fans of the band. Singer Pete Cox was resplendent in a very fetching purple suit while sidekick/guitarist Richard Drummie opted for a look more casual than smart. Both work well together, the result of decades of live performance.

Eye to Eye had a lovely sax break courtesy of Rob Hughes while the night was punctuated with some fine guitar work by longtime band member Ben Lochrie.

But of course, it was Go West’s back catalogue that got the loudest cheers. Goodbye Girl remains a haunting memoir of faded relationships, followed by Faithful, which sounded as much of its time as it did on release. The 2006 single Let Love Come (as Richard put it, “They didn’t play it, so you didn’t buy it”) featured more of that quality guitar work while The King is Dead had a contrasting jazz tempo. Meanwhile, usually in the background but occasionally to the fore, the orchestra clearly revelled in the opportunity of performing to an audience that were different to their usual, in a venue that suits them perfectly.

Track of My Tears had the audience singing, Call Me had them on the feet dancing and set closer We Close Our Eyes did both. Except that it wasn’t technically the closing number, because the band didn’t go off to return for an encore. As Pete rightly pointed out, the logistics of so many people leaving the stage then returning almost immediately were a bit difficult so much easier to stay on for the final song of the evening, King of Wishful Thinking, the band’s biggest American hit and a fitting end to a night where nostalgia successfully met innovation.