Simon Hale brings on back the good times at Birmingham Hippodrome.

It was the age of innocence when young people didn’t do drugs or troll each other on social media, but simply dreamed of dancing with their sweetheart.

We’re talking about the late 1950s and early 1960s – the era featured in the latest feel-good musical to arrive in Birmingham.

Nostalgia to those of a certain age in the Alexandra Theatre audience, this Bill Kenwright-directed production of the latest sequel based on the Dreamboats & Petticoats: Bringing on Back the Good Times albums had enough musical numbers to fill a jukebox. 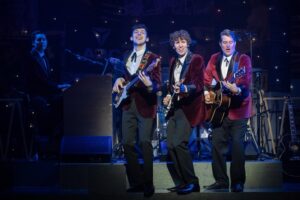 Excellently performed by the young cast, many of whom were also performing with musical instruments, the show had punters clapping and cheering to the likes of Baby Now That I Found You, Stop! In The Name of Love and At the Hop on opening night.
If you love the songs then you are in musical heaven, but if you’re looking to get excited by a great storyline there isn’t much to talk about.

It starts from teenage lovers and wannabee rock stars Laura (played by Elizabeth Carter) and Bobby (David Ribi) getting separated for a summer season – and, yes, when communication was by letter rather than smartphone, they inevitably miss each other.

It’s Butlin’s in Bognor to the Palace Theatre in Torquay for the singers and their bands with the help of manager Larry (Mark Wynter, the ‘60s singer of Venus in Blue Jeans fame) whose success at bookings somehow extends to Eurovision.

The dialogue becomes part of the lyrics of the next song but there are also plenty of cringeworthy gags, many of which are strictly adult. David Benson does a star turn however as a Kenneth Williams compere, interacting hilariously with the audience.

Given its joyful and uplifting songs and our need for some fun after our experience of the past two years, this sequel is certainly apt.

Dreamboats & Petticoats is in performance at the Alexandra Theatre, Birmingham until Saturday, March 26th.
Tickets.