Civil rights musical to be the centrepiece of new season.

Birmingham Hippodrome and China Plate have announced that their new concert musical To The Streets! will be performed at parks across the West Midlands this August as part of the Birmingham 2022 Festival.

To The Streets! is an uplifting new musical by Roy Williams and Tim Sutton inspired by the 1963 Bristol Bus Boycott, a pivotal moment in the UK’s civil rights history. To The Streets! follows the story of Paul Stephenson, an idealistic youth worker who takes to the streets to stand up for equality in Bristol where tensions are running high as the Omnibus Company refuse to employ Black or Asian drivers or conductors. Lorraine, a teenager newly arrived from Jamaica, joins the fight and in so doing, finds her voice and becomes part of a movement that changes history. The concert performances this summer will be presented within a day-long festival of experiences and will give audiences an opportunity to hear all the songs from the show ahead of a proposed national tour of the full stage musical, premiering at Birmingham Hippodrome in 2024.

Chris Sudworth, Director of Artistic Programme at Birmingham Hippodrome said: “We’re incredibly excited about the year ahead for Birmingham Hippodrome and for our region. We can’t wait for people to get a first taste of To The Streets! – developed by the wonderful team of Roy Williams, Tim Sutton, Christopher Haydon and Dannielle ‘Rhimes’ Lecointe, through our partnership with joint producers China Plate, with the Birmingham 2022 Festival, Warwick Arts Centre and DRPG. To The Streets! tells the story of such a pivotal moment in the fight for civil rights in the UK and is the next step in our commitment to producing high quality, bold and relevant large-scale work here in the Midlands.” 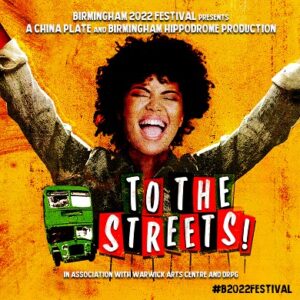 Paul Warwick, Director at China Plate said: “Having worked in the Midlands for over fifteen years, I feel immensely proud that China Plate have been commissioned as part of the Birmingham 2022 Festival alongside our coproducing partners Birmingham Hippodrome. To The Streets! gives us and our collaborators an incredible opportunity to shine a spotlight on the amazing creative talent in our city and region, whilst bringing people together to look again at the history and legacy of the Commonwealth.

“Alongside the production, our brilliant team of associate producers have been working with communities in North Birmingham for the last eighteen months to co-design a fantastic programme of events inspired by the show and realised with regional artists including Nilupa Yasmin, Jane Thakoordin, Black Heritage Walks Network and Overhear. We’ll be announcing this programme over the course of the spring and can’t wait to share all of this work with audiences across what looks set to be a tremendous summer for our city.”

Chris added: “As the Birmingham 2022 Festival launches, we are thrilled to announce so many sensational performances and events on and off our stages, produced and presented with brilliant partners, including some of the Hippodrome’s hugely loved free festivals.”

Featured productions from the Hippodrome within the Birmingham 2022 Festival programme include world-renowned UK Choreographer Akram Khan’s brand new dance-theatre production Jungle Book: Reimagined in April, which sees the journey of Mowgli through the eyes of a climate refugee.

In Confessions of a Cockney Temple Dancer in May, Shane Shambhu reveals his secret life as a ‘fat kid’ in the cultural melting pot of East London and his journey to international performer in a bedazzling mix of comedy, theatre and dance.

As part of Birmingham International Dance Festival, Birmingham and Barcelona based HUMANHOOD’s new production [Infinite] will guide audiences through a powerful, mystical journey in June. Birmingham Royal Ballet’s Director Carlos Acosta is bringing together three thrilling works for a triple bill presented at the Hippodrome in June. On Your Marks celebrates the expressive energy and gravity-defying athleticism of the company’s world-class dancers.

During August, Soul City Arts, led by multi-disciplinary artist Mohammed Ali, will transform the Hippodrome’s Patrick Studio with new immersive art and theatre experience WASWASA – Whispers in Prayer. This dynamic installation explores the act of Islamic prayer and what that means in a modern, secular society and will feature a replica of the Birmingham Qu’ran, one of the oldest known in the world.

This summer will also see the return of two of the Hippodrome’s popular free festivals. The annual B-SIDE Hip-Hop Festival in June will bring together extraordinary artists and breathtaking acts from across all elements of Hip-Hop and Birmingham Weekender will take place throughout the August bank holiday after a spectacular return to the city in 2021. Birmingham Hippodrome will be working in partnership with Bullring & Grand Central again to produce an awe-inspiring arts festival with a dynamic programme of events from world-class artists from across the West Midlands and beyond.

The Hippodrome will also host the BBC’s poetry and spoken word festival Contains Strong Language during September, and closing the Birmingham 2022 Festival will be the previously announced world premiere production from Rambert and Birmingham Hippodrome of Peaky Blinders: The Redemption of Thomas Shelby, written by Peaky Blinders creator Steven Knight.

Tickets for Jungle Book: Reimagined, Birmingham Royal Ballet On Your Marks and Rambert Dance in Peaky Blinders: The Redemption of Thomas Shelby are on sale now. Tickets for To The Streets!, Confessions of a Cockney Temple Dancer, Waswasa – Whispers in Prayer, [Infinite], and Contains Strong Language will go on sale in April.

Find out more at birminghamhippodrome.com.