Simon Hale is enthralled by the CBSO’s premiere.

Although written 85 years ago, Robert Nathaniel Dett’s The Ordering of Moses had never been performed by an orchestra in Britain.

The City of Birmingham Symphony Orchestra, joined by the CBSO Chorus and four guest vocalists, redressed the balance after giving the oratorio by the African American composer its long-overdue UK premiere.

Based on the Exodus story from the Bible in which God calls on Moses to lead his people out of slavery to the Promised Land, the fifty-minute piece conducted by Joshua Weilerstein at Birmingham’s Symphony Hall was a terrific tour de force. A brilliant fusion of Black folk music and western classical music, the work provided stunning emotional impact with its spirituals, fugues and canons interwoven with lush romantic and heroic orchestration.

With an all-black line up of soloists in tenor Rodrick Dixon as Moses, baritone Eric Greene as The Word of God, mezzo soprano Chrystal E Williams as The Voice of Israel and soprano Nadine Benjamin as Miriam, it was impossible not to associate the plight of Hebrew slaves of 3,000 years ago with the racial segregation that still existed in parts of Dett’s America in the 1930s. 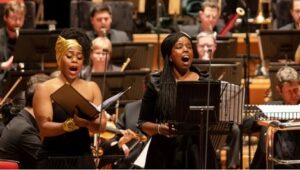 The initial contrast between the romantic orchestral introduction and a percussion section rattling chains, to show bondage, to the Word of God sung in a rich baritone was enough to send a shiver up the spine.

In one of the many gripping sections of the work we can hear the pre-Civil War spiritual Go Down, Moses, originally a cry for freedom by slaves, sung by the chorus to an infectious rhythm and culminating in a thrilling climax.

The narrative is represented mesmerically by the music, from the parting of the sea to the joy of the people of Israel as the reach freedom, when the harmonies just continue rising to a heaven-like conclusion.

All four soloists interacted supremely well with both chorus and orchestra while seemingly singing from the heart. Among the musicians, special credit must go to cellist Eduardo Vassallo for his beautiful solos that provide a link between each section of a work that deserved the standing ovation it received.

The CBSO’s all-American programme also included Charles Ives’s Variations on America, with its instantly recognisable tune that means to Americans their former national anthem My Country ‘Tis of Thee and to us God Save the Queen.

Continuing the freedom theme, Leonard Bernstein’s Symphonic Dances from West Side Story, first performed 20 years after The Ordering of Moses, rounded off an emotionally charged concert.

The tensions between the two gangs, the white Jets and the Puerto Rican Sharks, but also the love that comes from them in Tony and Maria, were represented so movingly in the rescored dances from the famous West Side Story musical that you went away feeling more hopeful of a better world.

The CBSO returns to Symphony Hall on Wednesday, March 2nd with a programme of music by Tchaikovsky and Stravinsky: cbso.co.uk.