A local playwright and poet, Ian Henery, has been commissioned to write a trilogy for China West Midlands. The first play is the little-known story of the Chinese Labour Corps to be premiered at The Blue Orange Theatre in Birmingham for Chinese New Year between 1st-5th February.

China West Midlands is a network of regional community organisations which exist to strengthen the connections in business, education, culture, arts and sports for deeper understanding, greater collaboration and mutual prosperity between the West Midlands and China. 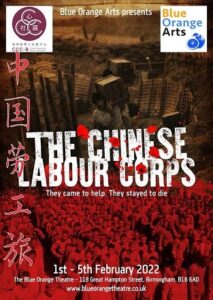 “It is estimated that between 1917-1920 over 140,000 Chinese young men volunteered to serve Great Britain and her allies in the First World War,” explained Ian. “Historians claim that 20,000 of these civilian volunteers died and some even after the First World War had ended. They died of disease, starvation and unexploded shells as they removed dead bodies, spent ammunition and unexploded bombs.”

Ian described how these civilian volunteers left their families and travelled half way around the world: by ship across the Pacific, quarantined in British Columbia and then by cattle truck under armed guard across Canada before being shipped across the Atlantic. “Some died on their way to France,” he said, “or simply thrown over the side of the ship to rest in unmarked graves, their families never knowing where their mortal remains were laid”.

The civilian volunteers had their distinctive pigtails, a mark of their culture, cut off by non-Chinese soldiers and they were then given a number. These civilians were then put under non-Chinese military control and their officers spoke no Chinese or understood Chinese culture. “They suffered terrible discrimination,” said Ian.

Two years after the Armistice they were still on the Western front picking up the bullets, filling in the trenches and recovering the decaying bodies of the dead.

“There are over 60,000 war memorials to the First World War in the UK,” said Ian, “including memorials to animals and Germans but none to the Chinese Labour Corps. They have been whitewashed from history books. Their contribution is forgotten.”

“This play deals with notions of time and place, family and sacrifice, identity and home from British and Chinese perspectives,”” explained Ian Henery. “In the furnace of the greatest conflict of humanity the world had ever seen, a British nurse and suffragette from Birmingham chose to love a member of the Chinese Labour Corps. Nobody chooses their DNA but we can choose to love. Some people choose to hate but there is too much hatred in the world. Love really does conquer all.

“What this poor, battered little planet needs is a surfeit of love. No more hate. On the Western front a nurse from Birmingham and a Chinese labourer chose to open their hearts and pay the price for having it smashed to pieces. The bill is always worth it, even if it cripples us, even if it scares us, even if it kills us. Nobody knows what the future will bring but we can choose to love.”