Paradise Circus, the latest in a line of promising Brummie rockers, have announced their biggest challenge to date, headlining Mama Roux on 21st December. Lead singer David Purchase says “This is the show where we bring B-town back, a show to be marked down in Brum history”. 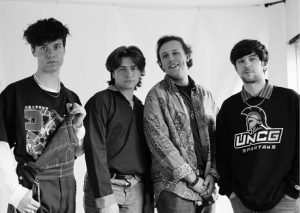 Praise from key industry outlets including NME and BBC Introducing in 2021 has seen the band step up from two sold out shows at The Dark Horse and The Sunflower Lounge to now headlining Mama Roux with only two standing gigs under their belt; defining them as a key name amongst the city’s thriving and ever-growing sonic output.

In the run up to the show, the band recruited an all-star team to record their biggest release to date, Cascade, due out on 10th November with Chris D’adda (The 1975), before being mixed by John Catlin (Inhaler) and mastered by John Davis (U2, Led Zeppelin) at Metropolis Studios. The new single Cascade follows April’s What a Way (cheetah) in pairing euphoric, crescending lyricism with unstoppable ambition and sun-soaked indie-rock guitars, showcasing a more tender, yet adventurous side to Paradise Circus than ever before.

It is clear that the boys are marking a new era for themselves and the B-town scene with unstoppable ambition and career-defining drive which sees them grow from strength to strength.