Another weekend performance in the Jewellery Quarter.

Henrik Jensen leads his own quartet Followed By Thirteen, which he founded in 2010. His compositions are thoughtful, playful, bursting with energy, at times melancholic and there is space in the arrangements with room for each member of the quartet to express themselves. The group released their second album, Blackwater, in September 2016 to extensive critical acclaim. The group are touring to coincide with the release of their third album and will be performing at 1,000 Trades on Friday 5th November. 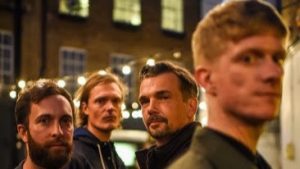 ​Bassist Jensen moved from Denmark to London in 1997 and is a graduate of the Royal Academy. He has toured the world from Tokyo to Moscow with various modern jazz projects.

On front-line duties is trumpeter Rory Simmons, best known for his work with Jamie Cullum’s band, in which he also plays guitar. Rory has also worked with Kyle Eastwood and is a highly regarded composer and producer. Pianist Esben Tjalve is also originally from Denmark, and leads his sextet Red Kite, which released their album Theory Of Colours in 2019 with an all-star cast including Jasper Hoiby of Phronesis. The group is completed by drummer Peter Ibbetson, who besides being one of London’s first call jazz drummers is also a composer and producer who has performed with Rosie Lowe and Dave Okumu.