The latest release from Birmingham legends to be is out now.

Anyone who follows the Birmingham music scene will be aware of the Clause. Since getting together in 2016 the band have been building a formidable reputation as well as a loyal fanbase with their brand of no-nonsense rock that borrows heavily from the all-time greats while defying labels. 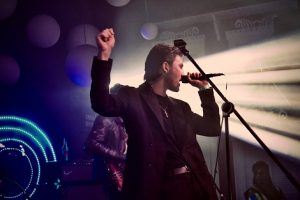 Their new release Cruella is out today, a song tipping its hat to a hypothetical heroine with a hold on whoever she meets. With a drum sound that emulates the Glitter Band and a swagger rarely seen since the glory days of the Faces, the Clause are bringing seventies attitudes to modern production values.

The band have been winning a reputation throughout the summer, culminating with a storming show at the Isle of Wight Festival. They’ve also been touring with the Pigeon Detectives, whose frontman Matt Bowman posted: “This is the most excited I’ve been about a new band in years. I’ve listened to their tunes non-stop and watched them play every single night on tour. The Clause are the real deal – go check them out.”

No wonder that it’s one of the band’s live favourites, and Cruella has been released after huge demand from audiences. Guitarist Liam Deakin came up with the tune before frontman Pearce Macca was inspired by the idea of a modern woman in total control of her world, penning the lyrics. Liam said: “It’s a bit of a Richards and Jagger vibe on this one. We were in the studio I had Kanye’s Black Skinhead drum loop stuck in my head. This song is about a powerful woman, in complete control.”