Battle of the Blues to take place at St Andrews.

Birmingham City Football Club has put out a call to find the best FIFA22 player in Birmingham, with cash prizes, signed merchandise and more on offer to those progressing furthest in its upcoming tournament – Battle of the Blues.

Starting online on Saturday 16th October and whittling down to a final eight across the weekend, the quarter finals will take place in-person at Blues’ home stadium, St. Andrew’s on Sunday 31st October. The eventual winner will pocket £1,000 in cash, with the runner-up and third place player taking home £500 and £250 respectively. 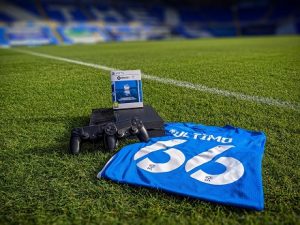 Ran in collaboration with the club’s esports partner Ultimo GG, signed merchandise, VIP hospitality and match tickets will also be up for grabs for players who make it to the latter stages. Ultimo GG, which is a specialist gaming platform and crypto company, will be hosting and managing the tournament for PS4 players.

The free-to-enter tournament will begin with 256 players at the start of the weekend, with five rounds standing between entrants and the final eight – hosted at St. Andrew’s at the end of the month. Players will be required to play as Birmingham City FC for the whole tournament, and finalists will all get refreshments in between rounds.

To grab one of the 256 spots for the Battle of the Blues tournament, visit Ultimo GG’s website. A full copy of the tournament rules can be found here.

With cash prizes up for grabs, all players must be 18 years old and above to enter, with top prizes paid as a cheque on the day of the final. All prizes are non-transferable with no cash-alternative for non-monetary prizes. If you are not available to attend the finals in-person, a bye will be handed to your opponent. PS5 players can still enter the tournament providing they use the PS4 version.