The independent charity Crimestoppers is offering a reward of up to £5,000 for information on an attempted murder after shots were fired and a car was rammed and set alight on a residential street in Walsall.

A number of people were injured on Cobden Street in Palfrey just after 1pm on Tuesday, 4th May after a silver Honda CRV 4×4 crashed into a stationary black VW Golf at the junction of King Street.

Just seconds later, shots were fired from another vehicle which arrived on the scene. The occupants of the 4×4 car then set their own vehicle alight and ran off. The fire spread to the Golf and a nearby house. 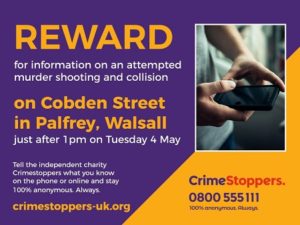 A 20-year-old man received treatment for a gunshot injury, but he has been released from hospital. A 34-year-old woman suffered injuries to both of her legs from the collision. She is still receiving treatment in hospital. Two other people at the scene were treated for smoke inhalation.

Crimestoppers is offering a reward of up to £5,000 for information the charity exclusively receives via its website Crimestoppers-uk.org or by freephone on 0800 555 111 which leads to the arrest and conviction of those responsible for this incident

Mick Duthie, Director of Operations at the charity Crimestoppers, said: “This is a particularly shocking, violent and frightening incident and it is not acceptable. It appears it was a targeted attack where occupants of two vehicles attacked the occupants of the third intentionally. We are appealing to anybody with any information about it to tell our independent charity what you know 100% anonymously. What you tell us can make all of the difference in keeping other people safe from harm.

“Crimestoppers is here to help people who – for whatever reason – can’t or won’t speak directly to the police, but want to do the right thing. We have been taking crime information since our charity began in the late 1980s. Our promise of anonymity to the millions of people who have trusted us has always been kept. Every day over a thousand people contact us. We’re not interested in who you are and will never ask for your details – all we want is information that might help to find those behind this violence.

“You can speak to us anonymously by calling our UK Contact Centre which is open 24/7 on freephone 0800 555 111 or you can use our simple and secure anonymous online form at www.crimestoppers-uk.org. No matter how small you think the information you have may be, please contact us.”