Birmingham’s Dig Brew Co brewery is all pumped up after launching what it believes to be the first American-style craft beer to be made exclusively with British hops.

Waka/Jawaka, a New England-style Double India Pale Ale, is the result of the brewery’s successful collaboration with Michelin-starred chef Brad Carter and leading hop merchant Charles Faram. The beer, brewed at Dig Brew Co’s premises on River Street in Digbeth, has been developed to replicate the flavour and aroma of a popular new world beer and at the same time support the growing UK hop industry. 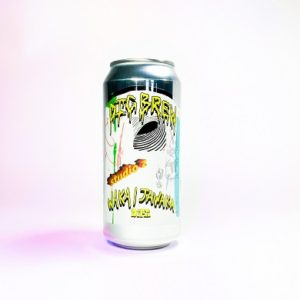 is developing fast, Brad and our team at Dig Brew Co came up with the idea of producing the first American-style beer to be made without having to source the hops from the new world.”

Oliver and Brad chose to work on the project with Worcestershire-based Charles Faram, which represents most British hop growers and accounts for around 70% of UK crop sales. Together the three parties selected and combined British hop varieties over several weeks to find a combination to match the characteristics of a New England DIPA.

Jamie MacLellan, UK Head of Sales for Charles Faram, said: “We saw this project as a great opportunity to showcase not only our new hop varieties but also the brewing expertise of Dig Brew Co combined with the vision of Brad Carter.”

He added: “UK hop breeding has taken significant steps forward in the past few years and the new varieties that are emerging are comparable to popular new world varieties.”

The result has been Waka/Jawaka, an imperial-strength IPA with an alcohol content of 8%. Named after two Californian hops, the beer is made purely from British hops in various levels of supply and development including Harlequin™, Olicana® and Jester®, as well as a hop still in its trial period and known simply as CF182. The ingredients also include pineapple weed, which Brad Carter identified as growing wild at Charles Faram and could be used as an adjunct all on its own, bringing similar flavours to some hops.

Brad Carter, Chef Owner of the Michelin-starred restaurant Carters of Moseley, serves Dig Brew Co beer from his craft beer list. His food menu is made up of dishes containing purely seasonal and sustainable UK-sourced ingredients including plants and wildflowers foraged locally from the land.

Brad said: “Having worked with Oliver for years, we both believe in supporting UK producers, as well as serving the local community. When we first discussed this project, we decided to launch Studio Z as the brand name for our collaboration – and we are already planning to make a Triple IPA.”

Oliver Webb added: “The new beer will increase customer choice, support our growing hop industry and help the UK to become more sustainable and less reliant on imports. While Covid lockdown curbs remain, we are concentrating our efforts on brewing and canning Waka/Jawaka and our other beers for more than 250 trade customers including wholesalers, bottle shops and off licences nationally as well as retail stores ranging from the NISA group to Selfridges.”

Dig Brew Co will remain closed to indoor hospitality and tours until late summer while further developments are planned. Their website is at digbrewco.com.