Media focus on racist in court will “remind people to behave” on nights out.

The organisation which runs Birmingham’s ‘golden mile’ entertainment district today welcomed the nationwide media focus on the court appearance of the woman who racially abused and spat at a pub door supervisor.

Multiple news brands ranging from The Sun to the BBC covered the case at Birmingham Magistrates yesterday where Sharna Walker heard she could face jail after admitting a charge of racially aggravated common assault.

And the Birmingham Mail newspaper today made the story its page one splash under the headline: ‘WOMAN FACING JAIL FOR RACIST TIRADE AT BOUNCER’. 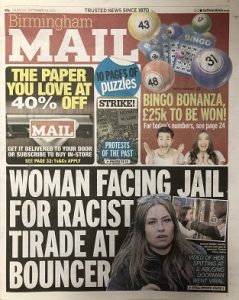 Walker, 25, of Woodhouse Close, Worcester, went viral on social media in May after the incident outside the Figure of Eight pub on Broad Street.

Mike Olley, general manager of Westside BID, said: “This was a shocking and ugly incident that we condemned at the time.

“We are glad to see the resulting court case getting such wide coverage as we hope this will remind people to behave properly and respectfully when they are out on the ‘golden mile’ in and around Broad Street.

“As a BID, working with our security partners and West Midlands Police, we simply will not tolerate such appalling racism and the fact that the judicial system is taking the case so seriously will help to drive that home to everyone.”

During yesterday’s court appearance, Walker’s defence solicitor Judith Kenney acknowledged that the punishment for the offence “starts at a custody level”, although she applied for medical reports to be prepared which she hoped she could “persuade the court to suspend the sentence”.

District Judge Briony Clarke granted Walker unconditional bail until an administrative hearing on 27th October. Walker has already been banned from all Westside’s licensed premises for twelve months as a result of her behaviour.

Meanwhile Tristan Price, the door supervisor subjected to Walker’s barrage of racial abuse, was last month recognised for the “professional and calm way” he handled the incident with a Star Award from National Pubwatch.

Mr Olley added: “Whether or not this young lady ends up serving a prison sentence is a matter for the courts, but the negative attention she has brought upon herself means she is already being punished, and the effects of that will last for a long time.

“I want to make it clear that we will seek to find and prosecute anyone who displays such racist behaviour on Westside, and I hope that message is understood.”