‘Congratulations’ are in order, as Birmingham Women’s Hospital Charity has hit the £1 million milestone in its £3.5 million Woodland House Appeal, thanks to a generous donation from the Cliff Richard Fan Club in celebration of the singer’s 80th birthday.

As a centre for excellence in women’s health, Birmingham Women’s Hospital is on a mission to improve the experiences of families going through pregnancy or baby loss by bringing Woodland House to its hospital, a standalone bereavement centre, away from the hustle and bustle of the wards, where families can grieve in private and get the support they need.

The Appeal was launched in 2019 and has captured the hearts of people from all over the region, and from further afield, many inspired by their own personal experience with pregnancy or baby loss, and the understanding that bereavement aftercare must be better for these devastated families. That includes supporters like the Cliff Richard Fan Club.

To celebrate the singer’s birthday, members of the Birmingham and West Midlands factions of the club decided to fundraise in his honour and one pair of fans, Zoe Gates (pictured) and Lottie Lindley, even took on a cycle challenge, covering 150 miles between them around their hometowns. 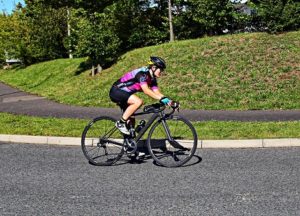 Altogether, the fundraising came to around £9,000, with match-funding, but when the club heard that following their donation, the Appeal was just a few thousand pounds from reaching its £1 million milestone, they decided to top up their donation to help reach the seven-figure mark.

Sir Cliff Richard said: “My Birmingham Fan Club members have smashed their targets for this year’s fundraising, despite the pandemic, and I am humbled to hear they have passed over a donation of £13,324 to Birmingham Women’s Hospital Charity to help fund Woodland House, the first of its kind in the UK, and it will be for parents to use after trauma and devastation of miscarriage, stillbirth or the death of a baby. I am so very grateful for all their worthy efforts, and feel very proud of every member that made this donation to celebrate my 80th birthday. My fans are very special. Thanks to you all.”

Miranda Williams, Head of Public Fundraising at Birmingham Women’s Hospital Charity, said: “We are absolutely blown away by the generosity of everyone at the Cliff Richard Fan Club – not only for their initial fundraising, but also adding to their donation to get us to £1 million. The Fan Club have been such champions of our Woodland House Appeal.

“We are trying to set the standard for pregnancy loss and neonatal death care nationally, and by creating Woodland House we will be able to improve the lives of thousands of families who experience pregnancy or baby loss at our hospital every year, and set a blueprint for other hospitals to use.

”Thank you to the Cliff Richard Fan Club and to every single supporter who has fundraised or donated to the Woodland House Appeal, so far. Thanks to you, we’re one step closer to making Woodland House a reality!”

Approximately 2,000 women experience loss at Birmingham Women’s Hospital every year. Currently, space within the hospital is limited and as such conversations take place in rooms and locations that don’t reflect the significance of a family’s loss. Patients often speak of feeling rushed and of having ‘nowhere to go’ after receiving devastating news.

Woodland House will be the first of its kind in a hospital setting and has been designed following patient feedback, which advocated the need for a standalone facility that was quiet and private.

Located to the right of the hospital’s main entrance, the new centre will feature separate and private access and will boast bespoke counselling rooms, a private garden, a large communal lounge area for support groups, and a family room with its own private access and garden. It will also have a private and sensitive mortuary, offering families the opportunity to spend time with their loved ones in comfort and serenity.

Find out more about the Woodland House Appeal or make a donation online visit bwh.org.uk/woodland-house. To donate £5, text WOODLAND to 70970 (standard terms apply).