This enchanting production felt much needed right now – a fabulous fantasy to help us, for a moment, forget the trials of 2020.

Other streamed productions might see us pressing the pause button to make a cup of tea – or refill that glass! Not this one. Spellbinding dancing and luxurious sets were a feast for the eye, keeping you glued to the screen, as the magical world which Clara enters unfolds.

It is Christmas Eve: The Stahlbaum family is hosting a party in their Edwardian drawing room. As the evening draws to a close, the magician Drosselmeyer, gives a nutcracker doll to the young Clara. At midnight, she returns to the drawing room, 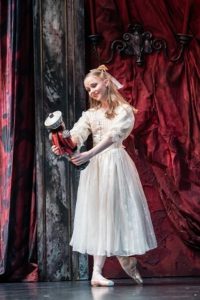 where the nutcracker is transformed into a handsome prince.

Mustering his toy infantry, the valiant prince battles with giant rats, and defeats the King Rat. Clara is then whisked away by Drosselmeyer on a fantastical journey where she encounters dancers from across the world, Tchaikovsky score’s providing a wonderful opportunity for cameo performances of Spanish, Arabian, Chinese and Russian dance.

Her journey continues through lands of snowflakes and flowers, leading, finally, to the world of the Sugar Plum Fairy, and the wonderful pas de deux of the fairy and the prince. Sadly, Clara’s dream comes to an end all too soon, as does ours.

The other stars of the show were surely the sets and the transformations between worlds. From the opulence of the drawing room, with its deep reds and blacks, to the glittering land of snow, the fantastical element of this production was maintained throughout. The only things missing were the resonance of dancers’ feet on the stage, and the sound of the audience applauding.

The Nutcracker was directed by Carlos Acosta, Director of Birmingham Royal Ballet. It was produced in a COVID-safe environment for the performers and the production crew.

Shortened to eighty-minutes, The Nutcracker is being streamed until 24th December, and is part of the ongoing collaboration between BRB and Birmingham Repertory Theatre. Information and tickets are available here.