Andy Munro wonders about words and their meaning.

Political Correctness might not go mad as often as it was said to, but the world appears to be heading that way, with Beeb’s proposal for one of their sports commentators, Radio Lincolnshire’s Steve Thompson, being sent for retraining for using dastardly terms like “handbags” and “drama queens” to describe incidents in a men’s football match. 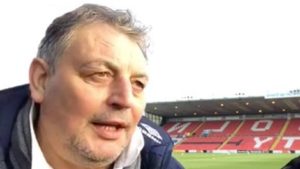 Quite frankly this nit-picking just undermines tackling the real issues. I bet if there was a poll of the great British public on views towards minority/disadvantaged groups then about 20% would unfortunately have overtly racist views, 30% would be exactly the opposite and 50% could swing (if you’ll excuse this term) either way.

And it is that latter largest group who are likely to be turned in the wrong direction if they are perpetually assailed by the sort of attitude the Beeb’s displaying. In saying that, while I count myself fully in the group of people who think people should be treated on their merit and attitude irrespective of creed or colour, I too get immensely irritated by the PC brigade’s gestapo like attitude.

Finally, on Black Lives Matter, I think ‘taking the knee’ was fine initially but has now become ridiculously hackneyed , masking and deflecting from action on the real issues. If I hear one more commentator explaining why the players are “taking the knee…” Does he (or she) think that we might interpret this as the start of an evangelical prayer session?

Beam me up Scotty!