Vivek Rajkhowa tells a tale of the city’s oldest tradition.

In 2016, Birmingham made the radical decision to vote to leave the European Union as part of a wave of votes across the UK that has been called Brexit. The result shocked many; it shouldn’t have. The vote to leave when the majority of established politicians and celebrities were campaigning to remain was just one more story in the grand narrative that makes up Birmingham’s radical history.

Birmingham truly appears on the political map of the UK in 1166 when the small rural manor was purchased by Peter de Bermingham with the granting of a Royal Charter by Henry II, which allowed him to hold a weekly market “at his castle at Birmingham” and to charge tolls on the market’s traffic. Birmingham grew into a prominent market town thanks to the fertile land of the plateau which enabled the town to become a prominent agricultural centre, particularly for cattle grazing and trading. Alongside cattle, Birmingham’s presence in the middle of England made it a centre for the wool trade alongside other industries such as pottery, tile, hemp and flax manufacturing which allowed the tradesmen and the Lord of the Manor to become very wealthy.

The fortunes of the town, however, changed dramatically during the late fifteenth and early sixteenth centuries as plague and religious upheaval saw the destruction of many of the institutions that had kept medieval Birmingham going. Edward de

Birmingham lost the Lordship of the Manor due to a feud with John Sutton, 3rd Baron Dudley, and after a brief period in the control of the Crown and the Duke of Northumberland, Birmingham was sold to Thomas Marrow, meaning Birmingham never again had a resident Lord of the Manor. This combined with the dissolution of the Guild of St John and the suppression of the Priory of St Thomas meant that the townspeople were granted a high degree of economic and social freedom that was unprecedented within the Kingdom.

As leather and textile trades gave way to the manufacturing of iron goods, the town developed as a manufacturing hub for weapons and other goods necessary for England’s development as a power during the sixteenth century. Something that Michael Hodder in his book Birmingham: Hidden History notes took Birmingham’s declining economy and replenished it, turning the town into a thriving trading centre, with a great deal of independence in the form of self-made merchants and manufacturers who answered to no one but themselves.

Birmingham’s booming economy combined with a lack of landed resident aristocracy meant that traditional social structures were eroded allowing a new form of social structure to develop. Relationships were based on pragmatic commercial links (like modern day capitalism) and the traditional loyalty and deference to the church and aristocracy was incredibly weak.

Consequently, when tensions between the Crown and Parliament started to grow in the 1630s, as Anne Hughes notes in her 2002 book on the Civil War in Warwickshire, Birmingham became a hub of radical Puritan activity. Lectures and books like those written by Thomas Hall questioning the structure of the Church of England were regular occurrences in the town and encouraged a 1640 petition against the local Justice of the Peace Sir Thomas Holte, showing the first signs of conflict with the country gentlemen who came from an alien world.

When the Civil War did break out in 1642, Birmingham was at the forefront of the Parliamentarian and Puritan cause. The town provided arms and munitions to the Parliamentarian army of the Earl of Essex and sent 400 men to Coventry to prevent it from surrendering. Trained bands from Moseley and King’s Norton ambushed King Charles’ army as it marched southwards before the Battle of Edge Hill and faced retaliation from Prince Rupert consequently. But this did not deter the people of Birmingham. Birmingham’s manufacturing hub provided Parliamentary commander John ‘Tinker Fox’ with men and arms to occupy key positions within the town including Edgbaston Hall.

Following the end of the Civil War and the beginning of the Enlightenment, Birmingham became an intellectual hub, inspiring what Peter Jones calls, the ‘Midlands Enlightenment’ which brought about an age of scientific and literary discovery within the town and the country and established Birmingham as a freethinking nonconformist bastion. A town that did not stand within the mainstream culture taught by the Church of England.

The development of the Enlightenment within Birmingham and its willingness to embrace rational, industrial and scientific thinking is what Peter Jones argues allowed the town to become a centre for the industrial revolution that swept Britain in 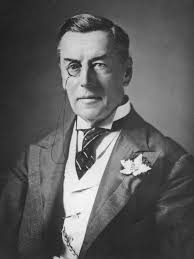 the late eighteenth and early nineteenth centuries. Allowing the town to become a prosperous centre for industry and to continue its long storied path toward adventure.

Of course, these developments didn’t come without a cost. Birmingham’s importance as a manufacturing hub had seen it given representation in Parliament in the 1832 Reform Act, but this did not mean that the town had managed to keep up with the pace of change. Many of Birmingham’s residents lived in overcrowded and unsanitary conditions. In answer to this, in the 1840s, nonconformist preacher George Dawson started promoting a doctrine of social responsibility and municipal improvement that gained the name Civic Gospel. His philosophy would inspire a group of reformers led by Joseph Chamberlain (pictured).

These reformers were elected to the Town Council as Liberals and started enacting the ideas of Dawson’s Civic Gospel, ideas which reached their peak during Chamberlain’s tenure as Mayor from 1873-1876. Birmingham was transformed under Chamberlain, the city’s gas and water works were purchased by the city, the lighting was improved and clean drinking water was provided to the city, the income from the city’s ownership of these utilities was reinvested into the city to provide for new amenities. Under Chamberlain, some of Birmingham’s worst slums were removed, a new thoroughfare was constructed, parks were created and libraries were opened, providing a blueprint for municipal reform everywhere, including the capital London.

Outside of the political arena, the arts served as another centre for Birmingham’s radical history. Whilst the rest of the country battled with the impact of deindustrialisation and decolonisation, Birmingham embraced them, producing a thriving music scene that spawned an entire genre in heavy metal, and reinvented the wheel in another genre in reggae. Bands such as Black Sabbath and UB40 put Birmingham on the map, and turned it into a sort of musical Mecca for aspiring musicians, a trend that continues to this day.

Birmingham didn’t suddenly embrace radicalism during the 2016 Referendum. Its history is littered with radicalism, from embracing capitalism from its very beginning to religious nonconformism, to eschewing musical trends, Birmingham has always been at the forefront of radical movements. The vote was just another step in the city’s long and storied dance with radicalism, long may it continue.