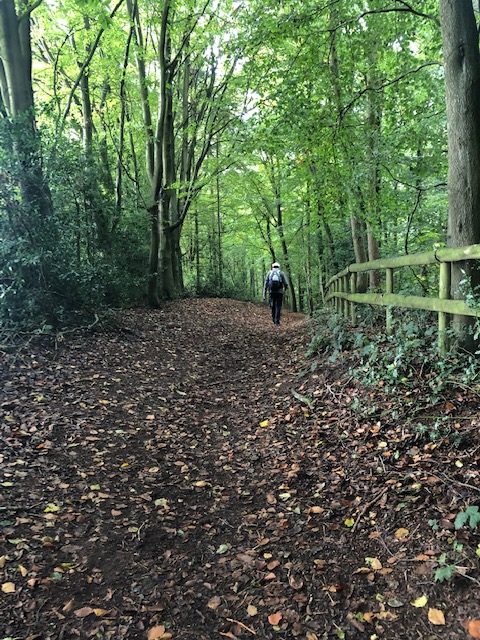 BR walks through a funnel of green. Brown dirt paths underneath but a continual canvas of green above and around him. A week into October and summer colour remains, a canopy held over from July and August.

Kinver Edge is a gentle escarpment looming over the land. To the east is a smattering of farming villages spread over fertile flatlands that spreads to the edge of sight, to urban Dudley and of Bredon Hill and the outline of The Malverns. Is that the vague hint of the Cotswolds behind it all, southeast of us? I don’t know.

We sit on a bench along the edge. It looks west, not east. It’s different looking west: rolling lush fields increasingly give way to sharper terrain such as Pen Y Fan, Clee Hill, Ragleth Hill and Caer Caradoc.

Are those The Black Mountains way out there? I don’t know. The whole western view slowly lifting to hilly country is framed by a spreading oak tree. We like it better than the eastern view.

But why? What makes us enjoy the western rolling hills more than the east’s quieter view? I think it’s the landscape of seeing. From the time of outdoor painting and then photography, we are taught to love rolling verdancy more than broad serenity.

The artist’s eye is ingrained in our way of seeing, in the language of  sight. To look west of  Kinver with its framing oak tree is what we are taught to see and enjoy.

The late writer Alistair Gray said landscape doesn’t exist until an artist has drawn it. He has a point. How many times have you taken in the English countryside and said: “It’s just like a Constable”. Seen a mountain view and said: “That could be a Peplow or a Cezanne”. Or gloried in a perfect Caribbean island and said:  “Wow, that’s out of James Bond”.

We are ingrained. We are part of a vast cultural package and each of us frame our visual intellect through what we have been taught, inferentially, to accept as gorgeous, or ghastly. 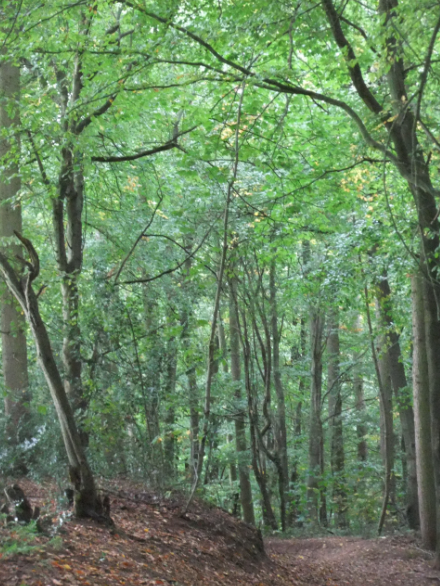 Off the escarpment, with its cave homes that labouring families used until the mid twentieth century, we peer through thick woods to glimpse tidy farmhouses sitting on those little rolling hills and knolls.

The paths are wide, for horses, for carts, possibly they were quarrying roads or drove roads for the herds coming down from remote settlements  meandering toward the cattle markets of Birmingham, Worcester and Wolverhampton.

I continue on a route that will connect me to a second track. I sometimes take it as it ends at an old roadhouse with its own brewery. I won’t say the boozer’s name because the owners of The Cat in Enville would get embarrassed. I wouldn’t want that.

I meander through oak and ash. At a T-junction deep in the woods, the map says go due east. Something inside my gut says go the other way- to the northwest. I don’t know why. The map obviously wants me to go east.

I walk north-west. Amazingly, I am right and I soon connect with the long distance Staffordshire Way. 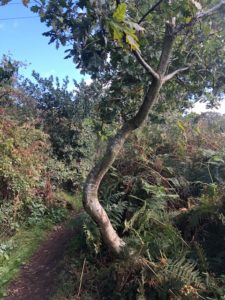 At the brow of a hill I pass a crooked tree (above) and I now know I am going the correct route. In a small cut in the land, frilled with blackberries and grasses, I meet a man in a kilt. It’s not a tartan that you find in Scotland with its clan identities.

It’s black. It’s very designer-friendly. He’s taking great strides uphill. “Must be tough with all the brambles and the thorns,” I say. I figure that’s what you say to men decked out in kilts, I guess.

He must get a quip a day similar to mine. “Nope,” he says with his pleated black kilt. “It’s the stinging nettles that get me every time.”And he produces a wan smile built of painful memories and sharp twists of thorny wounds.

2 thoughts on “Kinver and the landscape of seeing”