Students to begin university life with help from exam board.

Twelve exceptionally gifted and community-minded West Midlands A Level students about to start as undergraduates at Cambridge University have been awarded bursaries by exam board OCR to support them during their studies. The students attended a range of schools and colleges across the West Midlands, from Coventry to Stoke on Trent.

The students, eleven of whom begin at Cambridge next week and one who has deferred until next year, will receive a bursary of £3,000 from OCR for each year of their undergraduate course. The bursaries help students to make the most of their time at university, and reduce worry about money. They can use the money towards living costs, tuition fees or a combination of both. Ever since 2004, OCR – which is part of Cambridge University – has supported students from the West Midlands going to Cambridge University due to historical links to the West Midlands Examinations Board.

Jill Duffy, OCR’s Chief Executive, sent a special message congratulating each of the students, who start their courses next week. She commented: “Awarding these bursaries is a special pleasure for us at OCR. We are always humbled by how much these young people have achieved, often under difficult circumstances. They make the most of every opportunity and we hope the bursary will help them to carry on doing that at university.

£This year has been tougher than most for young people, and it makes their achievements even greater. One of the students even found time during lockdown to design an extension clip for facemasks for health-care professionals that has gone into production. As well as clearly being academic high achievers, many have supported other students in their schools and carried out voluntary work in their local communities. There are also gifted sportspeople, including a competitive trampolinist and county hockey player and athlete; musicians and debaters, with one presenting a resolution at the Model United Nations.

“While they are arriving at Cambridge University at an uncertain time, I am sure they will flourish there and continue to get the best out of every opportunity that’s presented to them. On behalf of the whole team at OCR, I wish them all the best for their time at university and beyond.”

This year’s OCR bursary winners are:

Zak Ismail, 18, from Birmingham, who attended King Edward VI High School for Girls, will be studying History at Peterhouse College. 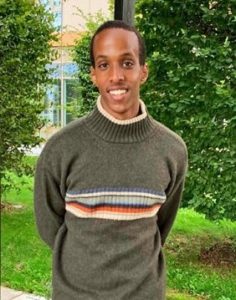