Villa lose 3-0 to Manchester United and Dave Woodhall is getting a bit unhappy.

It’s been twenty-five years since the almost-mythical time that Villa beat Manchester United at home. The kids that you win nothing with have grown up, had kids of their own and some of them might well be grandparents now but the song remains the same.

The intervening quarter of a century has seen routine defeats, heavy defeats and heartbreaking defeats from the jaws of victory. Thursday night’s was one of the routine ones, and if United had been a bit more bothered it could have been one of 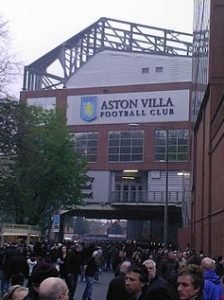 the heaviest as well. The air of familiarity that comes from ‘entertaining’ Manchester United was emphasised with the team that was put out to play them. Same names, same formation, same effort, same gameplan.

Better minds than I would struggle to work out how it was expected to succeed against a team who on current form are the best in the country, and possibly Europe. Why couldn’t we have played them in November, when we were half-decent and they were struggling?

Anyway, play them in July we had to, even if the weather was more like autumn than high summer, and if there was a bright spark to take from the game Villa didn’t begin too badly. If Trezeguet had scored instead of hitting the post early on then at least the goal difference would have been a bit better, but from the time a disputed, to put it mildly, penalty was converted, Villa gave up.

Jon Moss may have learned all he knows about officiating from Phil Dowd, but he wasn’t really needed. United got another just before half-time (something else that’s become all too familiar this season) and the second half was another of those practice matches in which the Villa have become experts since we started the whole thing off again last month.

Dean Smith gets enough criticism for his tactics and inability to change things round, but he’s not the only one who should be coming in for some stick. The one thing that Villa have woefully lacked since the restart has been a leader, someone to motivate the team and kick arses. If Smith doesn’t do it, then the job should go to John Terry, but the Captain, Leader, Legend of two years ago has become the Invisible Man. And talking of invisible men and captains…

Of course, it’s not over (just) yet. We’ve got Crystal Palace on Sunday and if I were paranoid I would say there was definitely something unfair about the additional two days rest they’ll have had since their last game. Villa have got to win, but more than that they’ve got to show that despite the overwhelming evidence, they haven’t yet given up. However, from what we’re seeing in ever-increasing doses, they’re spending more time talking to their agents about the next move than listening to the coaching staff of the club that are still paying them.

There’s been some disgraceful attitudes on display in recent weeks, and while you might win nothing with kids, they’ll always be a better bet than a bunch of under-achieving prima donas who go missing when work is needed. If we’re planning for the future I’d start by looking at some of the crop of youngsters who are on the fringes of the first team and by giving the captain’s armband to the one player who seems to have trained during the lockdown and who as a result has looked head and shoulders above the rest. Douglas Luiz, for the past month the only Villa player worthy of the name.

One thought on “Aston Villa and it’s happening again”