Blues’ Sunday excursion to Stoke was yet another depressing tale and we can only hope that the last match comes round against Derby, the opposition have no play-off incentive. 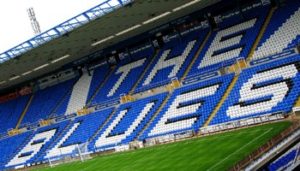 enough to get anything out of this match. It seems easy money to knock the Gardner/Spooner caretaking team, but players are hardly likely to be rejuvenated and inspired by somebody who was part of the departing manager’s coaching team. His side kick may be Blues through and through but he’s unlikely to front a sparkling chat show any time soon.

Yes, we had two key players out in Pederson and Clarke-Salter but to change from the back four line-up we’re used to playing to a back three (including a rookie, promising though he may be) and wingbacks seemed madness when we’re desperate to restore the cohesion we had pre-COVID. To add to this, if you play two forwards then getting in crosses is of paramount importance so the relegation of Bela to the subs bench (compounded by the Chinese ownership prematurely ditching two wingers) made no tactical sense.

Things only improved with the introduction of the tricky Bela and the creative Dan Crowley but by then it was far too late. Again Lee Camp was excellent and saved us from a trouncing when goal difference is starting to look more and more important.

I really feel for Wigan, who deserve to stay up, but realistically their imminent twelve point deduction represents our main chance of survival. And it’s probably only the impending sale of Jude Bellingham that prevents us going down the same route.