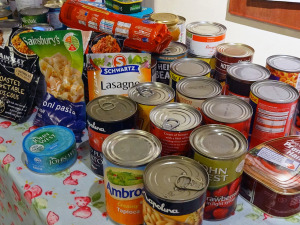 The handwritten note on the envelope is emphatic, direct, to the point. No nonsense. “Four curly kales, two firelighter packs, one stamp (second class), The Herald. £2.30 inside”. It’s from Margaret and she’s on my delivery list for the elderly who regularly order food from Paul’s seaside village shop.

She explains: “The curly kale is for the guinea pigs, the firelighters are for the front room, The Herald is for Alistair.” He’s a bit tired in the legs now as he enters his tenth decade.

On to Ethne. She’s got a bottle of gin coming with some tonic water, seven bags of crisps – not cheese and onion – and a packet of Chesterfield filter tipped Greens. But not like last week when I incorrectly delivered Chesterfield Blacks. They went straight back to Paul’s the next day. No Chesterfield blacks. “I think everyone’s got this routine of not going out down pretty well, what with the virus,”  she says as she eyes a doubtful coastal sky.

Next door, Burt tells me a bit about his house. It has all the mod cons with underfloor heating, a pellet fuel system and solar panels. “Never have to heat the bedroom,” he announces as I deliver  his copy of The Daily Express and some early potatoes. “And they give me £700 a quarter for all this environment stuff.” I’m not sure who ‘they’ are, but Burt has it all figured out. He has to stay warm; his doctor told him not to go out because of ‘the disease.’ Can’t go out into the spring cold. It goes right through him.  Plus, inside, he has an eye filling view of the rumbly Clyde estuary that sweeps up the coast from Stranraer.

My route is more or less the same each day; it fills the bill of getting out each morning come wind, come rain, come more wind and more rain. I’m asked for leeks, cat food, kindling wood, baking soda and requests for posting letters- most of them addressed in that careful curlique script used by ‘the older folk’.

My customers, some rooted in the village for 70 or 80 years, are all polite, chatty, interested.  But who is this stranger, they want to know, that hands them their newspaper, their bread, their blue capped milk? The next time I come to the door, they know. “You’re Kathleen’s son in law in that wee white cottage.” They’ve been doing their homework. They know I live in the wee white cottage and that’s a shrewd calculation as I estimate 86% of the homes here fit that description. My final stop is at Mary’s. It’s a time for her to hear a voice. She lives alone and is at the door as I amble up the drive with my bags. We pass the time and chat about the weather; “Well,” she says, “it might be warm down in England but not here.” She seems to tug her green fleece tighter when she says this as the sharp breeze from Northern Ireland whisks through this part of the Scottish coast.

The route’s daily duration is flexible, linked, of course, on the length of delivery chats and the lockdown restrictions. I wear gloves, there’s a scarf wrapped around my face when I’m picking up the orders, there’s a polite but firm refusal to handle cash that’s not in an envelope. There’s an automatic turndown if a cup of tea and a biscuit is on offer.

Then, I’m home for morning coffee. Today, there’s not much time. Jane is part of a volunteer workforce. She’s about to pick up medicine for Andy McB. It’s her first foray with her new charity name tag and I think she’s chuffed to be official. 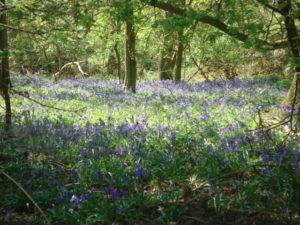 Later after these voluntary duties, we head into the woods. It’s finally alive. There’s celandine, primrose, vinca, violets, mayflowers and the tips of emerging bluebells. Some of the early trees, like chestnut, are popping into leaf. You’d have to ruled by a hard heart not to enjoy a bluebell wood bathed in a weak spring sunshine. It’s one of the gentle wonders of Britain in this, the time of lockdown.

7 thoughts on “Life in the time of Corona”