Fronted by the charismatic Suggs, Madness’ ability to write songs that sparkle with the stuff of British life, that find poetry in everyday reality, has lead them to have many hits including Baggy Trousers, It Must Be Love, Driving In My Car, Our House and House of Fun.

Ahead of their summer racecourse shows, which include a date at Wolverhampton, frontman Suggs talks about what makes them such an endearingly popular band.

What are the qualities that make Madness endure?

“I think the reason we endure is that we genuinely do enjoy ourselves. From the very beginning you could see the joy in the early videos we made and hear it in the records. The fact that we were friends before this band started is key. I genuinely think the whole spark or art of craft and creativity was a by-product of our friendship. 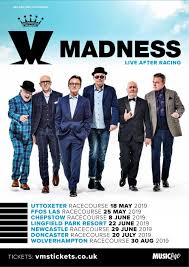 “I think that’s what people feel. It’s a genuine experience. It’s not manufactured. I can’t ever remember being onstage and feeling fed up with the people around me. It’s been very flattering and marvellous to see so many different age groups enjoying the band. We are looking forward to this on the tour – people of all ages.”

How will you keep yourself match fit for the summer shows?

“It’s like preparing for war, a war of fun y’know? A war of fun and frolics but, unlike the Romans, we are going to unleash heaven. I have a suspicion that if I didn’t have a few tequila shots before I went onstage I wouldn’t be quite as lubricated in the joints. Tequila and orange juice is the secret of keeping those limbs loose! I suppose our rituals are now so ingrained that I don’t notice what the rest of the band are doing.

Traditionally, we don’t tour for months and months – we gave up on America and they probably gave up on us. Touring for years on end is what drains the lifeblood out of a lot of acts that I see., so each tour we do we try and make unique – and special. We can change the setlist nightly if we wish, the main thing is to keep it exciting for yourself, that’s the way to ensure the audience is kept excited too.”

Racecourses make up quite a bit of your itinerary. Are you fond of a flutter or a day at the track?

“Racecourses are great. We’ve played a few in the past where they have been a few races and then you get a bit of Madness. It’s an unbeatable combination.

“I have a few flutters every now and then and have a bit of luck on the horses. I’m not a gambling man generally but I like it when you can see the steam coming out of the horses’ nostrils and that whole thing in front of you. I do like it but I’m terrible loser, which has been my saving grace as far as gambling is concerned, as it’s stopped me getting too involved.

“I did wake up with a greyhound in my bed once. We had been to a charity auction at Walthamstow dog track and there was an auction for the greyhound and we won. I came home with a greyhound, which my wife was quite thrilled about. He did alright actually, we called him Nutty Boy and he went on to win quite a few races. That was quite a nice time and the nearest I ever got to be an Alex Ferguson-esque race horse owner. Turning up at the track as a dog owner was quite an experience.

“I really look forward to all the racecourse shows.”