The world-famous Monaco Boys Choir will be performing at St Chad’s Cathedral in Birmingham on 12th July.

Monaco Boys Choir, ‘Les Petits Chanteurs de Monaco’, is one of the world’s leading youth choirs and is celebrated internationally for its repertoire of classical and traditional works. 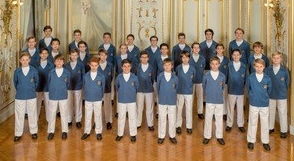 The choir is embarking on a three-week tour of Britain in July, organised by Shrewsbury based Janet Redler Travel & Tourism, and will be performing at St Chad’s Cathedral in Birmingham at 7.30pm on Friday 12 July.

Established by Prince Albert I of Monaco in 1904, the choir is comprised of 30 boys between 9 and 18 years of age. Today, under the patronage of HSH Prince Albert II of Monaco, and with the generous support of the Monaco government, the choir performs charity concerts all around the globe.

Monaco Boys Choir gives an average of forty concerts each year and has visited more than forty countries. Its musical repertoire includes sacred works by the likes of Bach, Mozart, Fauré and Mendelssohn, as well as traditional folk songs and French chansons.

This free concert is open to all. For further details call 01743 360333 or email music@rc-birmingham.org