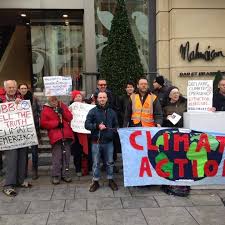 The group intend to target the area near Snow Hill station, aiming to block roads for seven minutes at a time. The action comes after the city council recently announced a climate emergency.

The group claim to be taking non-violent action they deem “necessary and appropriate” in the fight to combat climate change.

In a statement released last night, they stateded that the need to disrupt normal business traffic is vital to get across to the public the need for action to avoid what they claim is a “climate and ecological crisis”.