Andy Street is missing a major opportunity for the West Midlands to reduce lead Britain’s Green Revolution, which could create the jobs to end youth unemployment, says Liam Byrne MP, responding to papers published in advance of the West Midlands Combined Authority Board meeting later today.

Papers for the West Midlands Board Meeting reveal the Mayor is only aiming to bring carbon emissions down to net zero by 2041 – the minimum progress needed to meet Government deadlines. This is despite the Mayor’s recent statement that the West Midlands has a “moral responsibility to lead the fight on the climate crisis”.

Birmingham City Council have already taken matters into their own hands with a unanimous vote to declare a climate emergency in the city.

But the WMCA board papers also reveal that mayor Andy Street (pictured) has presided over a catastrophic 31% fall in apprenticeship numbers as youth unemployment figures across the region remain “stubbornly high” by the WMCA’s own admission. 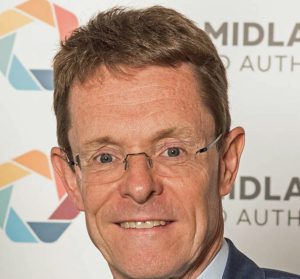 Liam Byrne said: “The West Midlands, the home of the first Industrial Revolution, should be leading the Green Revolution – but the Mayor appears to doing the minimum.

“We should be the first city region to become carbon neutral, creating jobs in green industry for young people in the process. Instead Andy Street is has presided over a catastrophic fall in apprenticeships while youth unemployment remains sky high.”

The Hodge Hill MP went on to criticise Andy Street for doing too little on Universal Credit, a policy that is driving families across the region to food banks.

Andy Street has done nothing to persuade ministers to pause rollout of Universal Credit across the region, until problems with the controversial benefit are fixed – opting instead to recommend minor refinements.

Liam Byrne added: “The chaos created by the rollout of Universal Credit is sending hundreds of families across our region to foodbanks. Benefit delays are the number one reason putting people at risk of going hungry and as we go into the summer holidays, children on free school meals are in particular danger of not having enough to eat.”